The Nile is amongst the world’s longest waterways, holding magnificent ancient history around each winding bend. Having never been to Egypt or Africa, I arrived with no expectations. What I received in return was a glorious adventure I’ll never forget.

My trip started at the Abu Simbel temples, a UNESCO World Heritage site dating back to the 13th century. The four towering statues of Rameses II greeted me as I entered inside the hypostyle hall. Exploring it is a step back in time. The interior contains several paths and rooms. Scenes of Rameses’ military victories, personal life and portraits of the ancient Egyptian gods are found in detail throughout. Not to be missed is the additional smaller temple, located a few steps from the main complex, built in honor of Rameses II favorite wife, Queen Nefertari. Her temple is unique with more feminine details, like the image of Rameses and Nefertari presenting papyrus plants to the goddess Hathor, who is depicted as a cow on a boat sailing in a thicket of papyri. 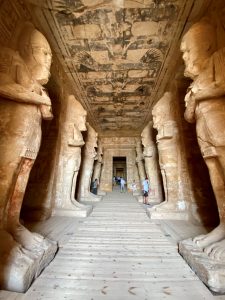 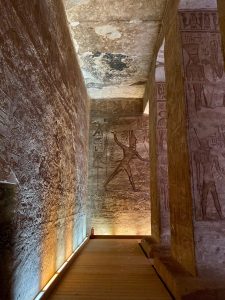 From Abu Simbel, we headed to Aswan, where we boarded our luxury cruise for the next 4 days. Starting with a relaxing felucca boat ride, I was given an entirely new perspective of the region. The Nubian influence was never more present than when viewing the colorful houses lining the river bank.  We then headed by boat to Philae Temple, a beautiful mix of Egyptian, Greek and Roman cultures. Built in honor of the goddess Isis, it’s picturesque surrounded by palm trees and water. It was one of the last places in Egypt where the ancient religion survived after the arrival of Christianity. 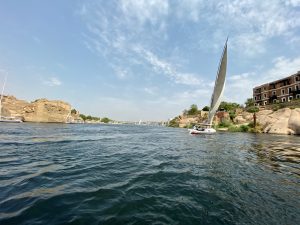 Continuing down the Nile, we next stopped to explore Kom Ombo, dedicated to the crocodile god, Sobek and the falcon god, Horus. This temple is unique as most were only dedicated to one god. Because of this, there are duplicate areas throughout where both gods are represented. The temple sits on a hill overlooking a small city and the Nile. As we explored, the sounds of the city and a fresh breeze drifted through the temple. If we closed our eyes, we could almost picture it in its full glory as it was thousands of years ago. Getting back on the cruise, we enjoyed sunset drinks while the boat sailed to our next destination. It was a magical way to end our day. 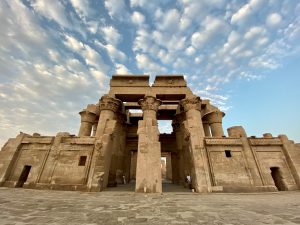 Other highlighted stops were Edfu and Esna. We arrived in Edfu and were met by a horse and carriage that took us along the bumpy streets of Edfu through markets and neighborhoods to finally arrive at the Temple of Horus, the largest and most well-preserved Pharaonic temple in Egypt. Dedicated to the falcon-head god of the sky, nothing was more spectacular than seeing Horus depicted in the hieroglyphs and in statues throughout the complex. Next was Esna and the Temple of Khnum. It’s located close to the Nile and, as a result, had to be excavated from all the silt that had covered it from the many years of Nile flooding. Although it’s small, it’s situated in the middle of the city and offers its own unique draw with preserved paintings and intricately detailed columns. 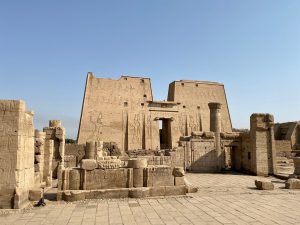 We then headed to our final cruise location of Luxor, a remarkable city with ample history. From the Temple of Hatshepsut and its demanding presence to the alabaster factories that have been in families for generations, there was much to see and do. We visited the Valley of the Kings and the astoundingly preserved colorful hieroglyphics lining the wall of each tomb. Then the tomb of Ramses VI, a definite favorite. One of the biggest and most colorful, if you look above at the ceilings, you’ll see many depictions of Nut, the goddess of night and day. Stopping at Karnak and Luxor temples rounded out the day, and watching the sunset hit the pillars of Luxor temple was the perfect ending for our Nile cruise. 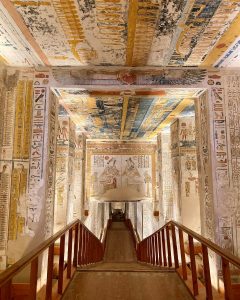 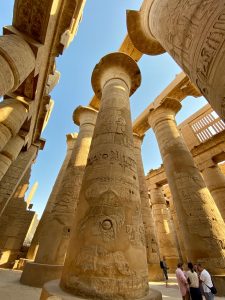 As we said our goodbyes to our guide, cruise staff and other travelers, there was a sense of sadness. The cruise was an amazing experience, one not soon forgotten. Cairo and the pyramids awaited us, so the bitter sweetness of leaving was met with excitement of what was next.

We flew into Cairo and immediately began exploring. Highlights included Sakkara, where the first pyramid and the world’s oldest free-standing structure was built. The pyramid of King Zoser does not have smooth sides, but instead boasts steps that are said to represent the pharaoh’s “stepladder to heaven.” Of course, the main reason for us to visit Cairo was the Great Pyramids of Giza. Words cannot describe how mighty and imposing they are in person. They’re truly extraordinary and earned their right to be the last surviving ancient wonders of the world.

We opted to be a bit more adventurous and navigated inside the cramped passages of the Great Pyramid of Khufu, to see the king’s chamber located in its center. Although hot, tiring and a bit intimidating, I can now say I have not only visited the Great Pyramid but been inside its center! Nearby, sits the Solar Boat Museum and Sphinx, neither of which can be missed. The Solar Boat Museum holds a cedar boat that was built as transportation for the king in the afterlife. The Sphinx is arguably the most recognizable at being associated with Egypt. It was incredibly built from one piece of limestone and for centuries, was the largest sculpture in the world. 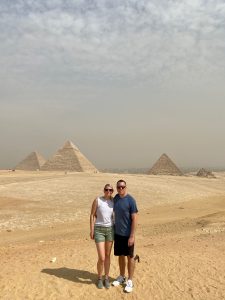 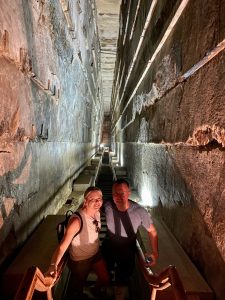 There were so many incredible sights seen, that I can’t quiet explain what this trip meant to me. I found a peace along the Nile and I learned a greater appreciation of this civilization that thrived 3,000+ years ahead of mine.