From the vast plains of Serengeti National Park, filled with stampeding wildebeest and kopjes, to the fertile slopes of Ngorongoro Crater, teaming with diverse wildlife and landscapes, a safari in Northern Tanzania is unlike anything else. You will undoubtedly leave with a lifetime of memories. But beyond this, what really makes Tanzania memorable is the people encountered, with their warmth and politeness; it is seeing, firsthand, the dignity and beauty of their cultures and learning how supporting them is an important part of the tourism industry in Tanzania.

While staying at Nomad Entamanu Private Camp, I was set to spend a day exploring the Ngorongoro Crater. The entire area is a sight to behold and descending into one of the most animal rich areas was nothing short of amazing. Spending a full day viewing wildlife here was a must; however I was most excited for the walking safari. Led by a Maasai guide, we would see the terrain and visit a local Maasai boma (village). Enriching myself in the culture and seeing how they go about their daily lives would be a wonderful compliment to the normal safari day and would offer an unforgettable cultural experience.

My walk began with introductions, during which I met our charismatic Maasai guide, Lesingo, and was given some safety instructions. We then set off along the crater rim, where the grassy terrain made for easy walking. From this vantage point, I could appreciate the different types of flora, fauna and bird species that would have be missed from a vehicle. I could pause to take in the 360 degree views of the crater. Standing still amidst a landscape whose beauty only Mother Nature could provide felt surreal and otherworldly.

As we went along, Lesingo pointed out or had us smell and feel a few different plant species that the Maasai use for medicinal purposes. He also shared some insight into the Maasai culture, from the rituals of boys coming of age to marriage ceremonies and how cows are their livelihood. The further we ventured, the more I felt a friendship form with Lesingo. He was so open, honest and proud to share as much as he could about his culture. 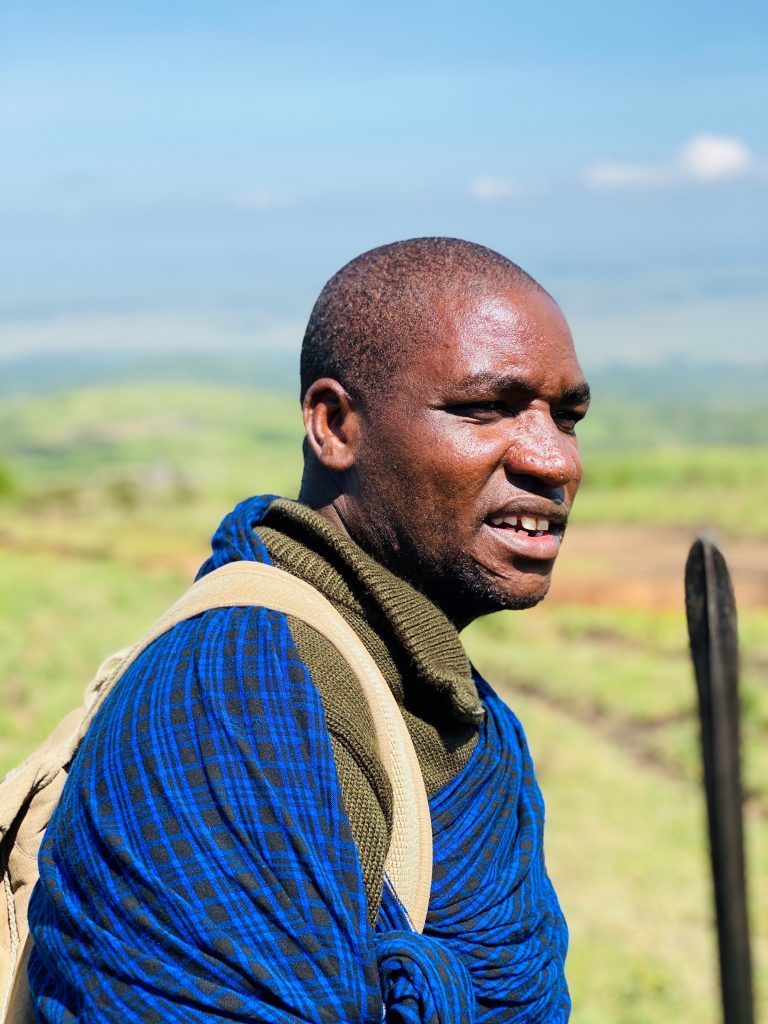 From the crater rim, we headed downhill, passing Maasai women on their way to collect daily water and young Maasai boys guiding their herds of cattle, donkeys, sheep and goats to feed. This was the pastoral lifestyle of the Maasai and I felt fortunate to be witnessing it firsthand. Our guide greeted each passerby, translated what he was saying and told us which Maasai community they were from. The love for his people and community was very apparent. I even learned a few Maasai words as we walked and soon was greeting the Maasai we met with “Sopa” and responding with “Ipa,” which essentially means “I am well.”

While a bit tougher, the descent was a welcome break from sitting in a safari vehicle, and I enjoyed watching the landscape change the further downhill we went. Lesingo pointed out different bomas scattered throughout and notable points of interest in the distance, like the Olduvai Gorge, one of the most important finds in our understanding of early human evolution. Eventually, we came to a dirt road and followed that for about five minutes until we arrived at the wooden fences of one particular boma. Here, the walk ended, and our window into Maasai home life began.

Maasai bomas are surrounded by a circular fence of thick and thorny bushes constructed for protection. Within reside small huts made of mud and cow dung where the Maasai live. Even further inside is another circular protective fence for the livestock.

Upon entering, we were soon greeted by some elder males and stood back as the whole village welcomed us with a traditional Maasai dance. For a few minutes I stood in awe as beautiful Maasai women wearing bright purple with white beads adorning their necks and heads alongside Maasai men in vibrant reds, blues and oranges sang and danced for us. Towards the end, the women gave me a necklace of my own and welcomed me to dance with them. One grabbed my hand to show support, and we danced away until the song finished. You know those moments you experience that you’ll never forget? This was one of them. I have never experienced something as magical as dancing with these women while they sang together in perfect harmony. 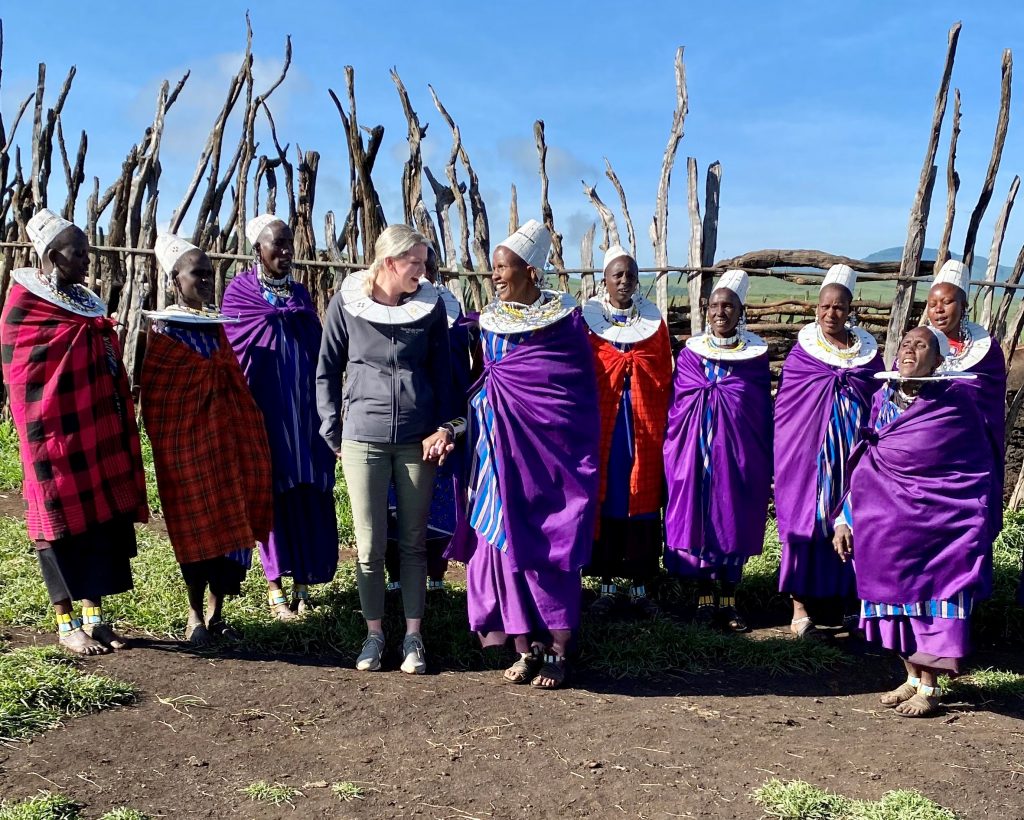 After this fascinating greeting, we were shown into one of the Maasai’s circular huts to see the layout of the interior. It consisted of a small fireplace in the center, a larger bed nook with a cowhide mattress along one wall, a smaller sleeping space designated for the children along the other wall, and a small area where cooking is done. Compared with Western housing, it was simplistic living, of which the Maasai are very proud.

Once back outside, a group of Maasai men gathered around to show us how they make fires the good ole fashioned way, using two sticks! One man started by rolling the sticks in between his hands for a few seconds; then another took over and they went back and forth until the little piece of tinder started smoking. They then helped the grass along with a few breaths and the fire burst to life. Although their homes and way of life seemed basic from American standards, I saw nothing but joy and pride in their eyes as they shared it with me. 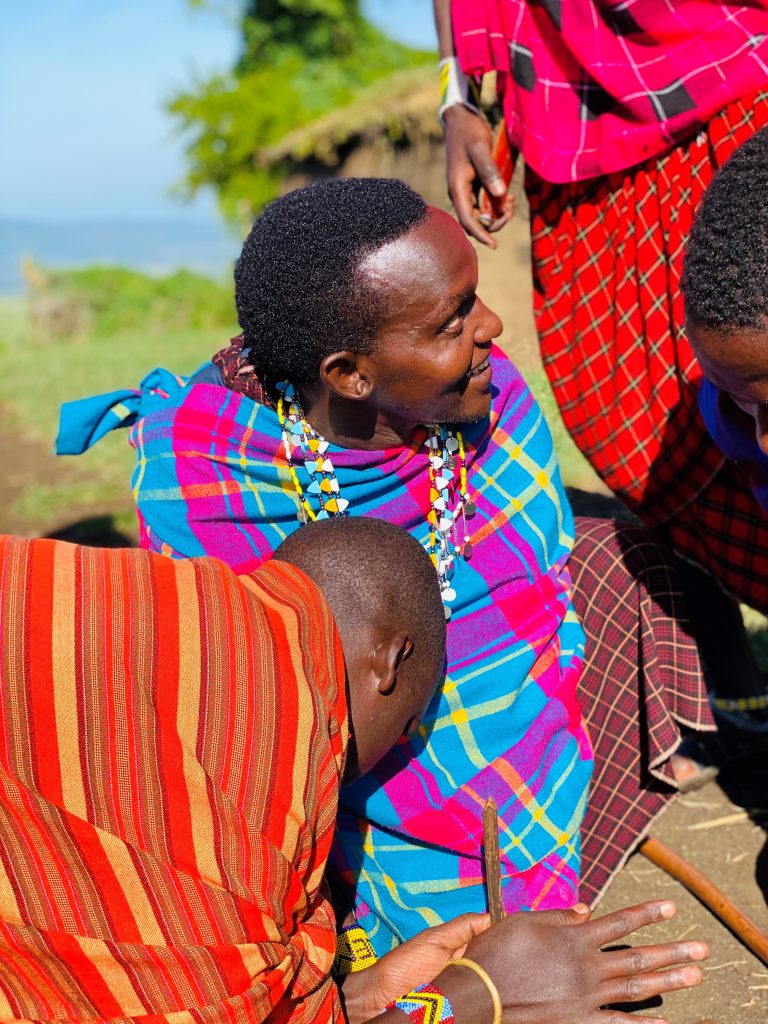 As we reached the end of our visit, we were shown to an area where the Maasai women displayed a wide variety of handmade items that were all beaded, including necklaces, bracelets, dishes, animals and purses. These pieces were all for sale and although we were neither forced nor felt like we had to purchase anything, I gladly bought a few gifts to bring to friends and family back home. It was explained to me that selling their handmade items is how the women of the village can help support their community; it is their only means of income. The money I used to purchase the gifts went into a community pot that all the Maasai in the area share to support their livelihoods. 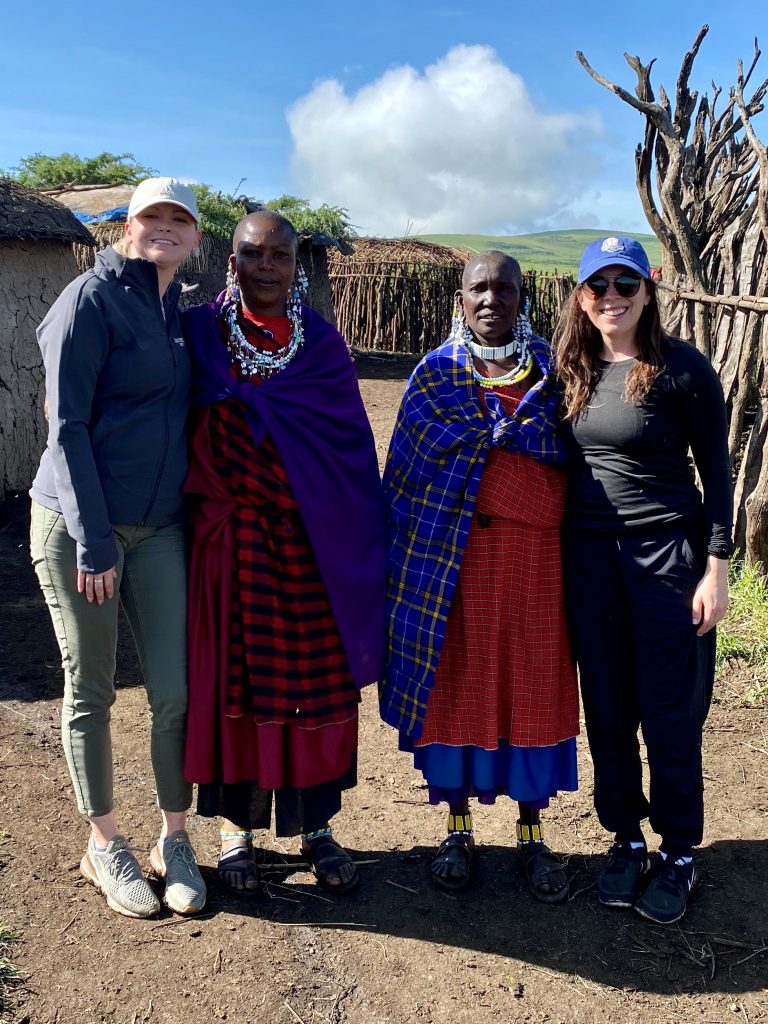 Reflecting on this cultural experience, I really came to understand the importance of tourism in Tanzania.  Not only does the development of this industry bring the Maasai people new opportunities to share their way of life, but it also provides them with positive income. I was so glad to be a part of that impact and that I got to take a piece of the Maasai culture with me as I returned home. 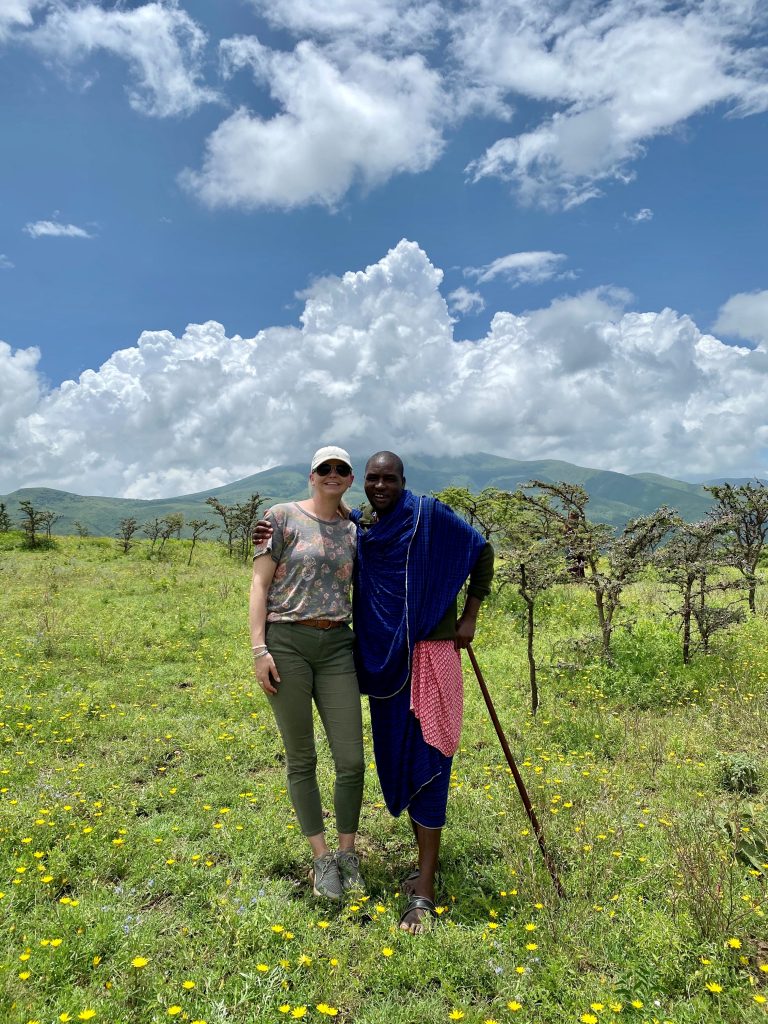