Those of you who know me or have worked with me can attest to the fact that there is nothing that gives me greater joy than traveling to Asia – the sweet aroma of spices and incense that clings to the air, the clanging of pans cooking up rice and noodles on the side of the street, the strange calm of a temple squeezed between rows of houses. Everything is so foreign compared to the life I have had growing up, and yet it oddly feels like exactly where I belong.

Back in 2019, I could have never predicted that Asia’s borders would remain closed for what is now two years. I’ve spent this time feeling both concern for our colleagues in Asia whose livelihoods rely on tourism, and personal frustration of being unable to promote the place I love so dearly. And yet, amidst all of this, a new opportunity arose. It all started with just one simple question: 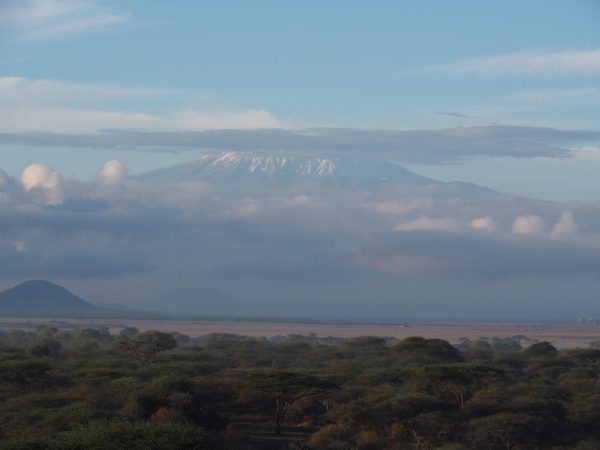 For over 47 years now, Travel Beyond has, first and foremost, been a safari company. My colleagues know more about the plains of Africa than I know about my own apartment (Which faucet was the hot water again? And how do I always manage to get it wrong?). For a team of over 30, I was one of the last remaining Travel Beyond holdouts, one of the only who had never set foot on African soil.

Of course, as a travel aficionado, I was more than excited for the opportunity. I’d spent years absorbing information, and felt, to some extent, I’d been to Africa through osmosis, simply by sharing space with Craig Beal. But here was my chance to finally experience a real safari. I thought I knew what was in store. But what I hadn’t expected from my time in Kenya, was to find so many parallels to Asia, or to realize that Africa may be the perfect getaway for those of us still waiting on our Asian vacation. 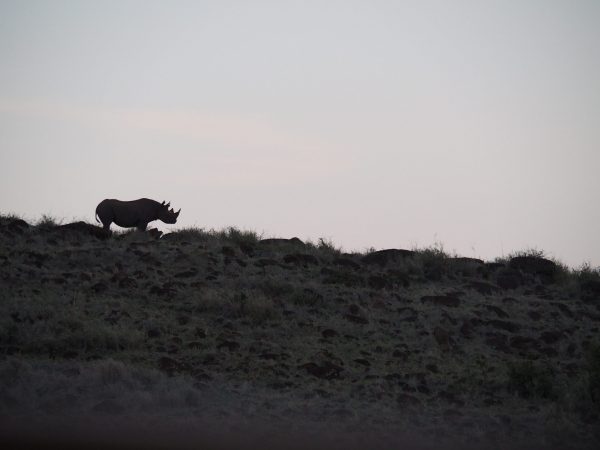 One of my favorite aspects of Asia has always been the sheer kindness of its people. Greeting you with a soft bow and a gleaming smile, they honestly want nothing more than for you to fall in love with their country (and eat 20 servings of their food). My guides in Asia have always felt like close friends or family; some have even invited me into their homes and shared intimate stories about their lives.

Upon arrival at Ol Donyo Lodge in Kenya, the staff welcomed us with a joyous song. I could tell they weren’t singing out of obligation but were instead truly enjoying the moment and expressing their happiness at meeting new friends. I instantly felt at home as they cracked jokes and enthusiastically told us to “look at the view!” At that moment all the frustration accrued over the past two years just rolled off my back. The world is most beautiful when its connected, and I felt honored to be somewhere with others who felt the same. 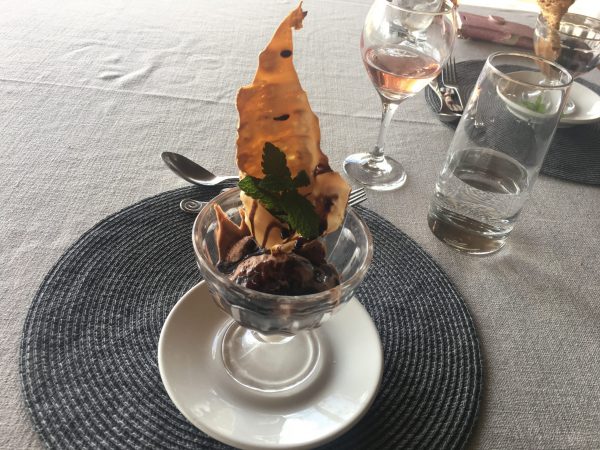 While the service in Asia is more subtle (your glass is cleared before you even realized it was empty!), in Kenya the service style proved more gregarious. Chefs often came out to explain the dining options and to inquire how it tasted (shoutout to pastry chef Joel from Mara Plains – I wish I could give you constructive criticism but, alas, your desserts are already perfect).

Whatever style suits your fancy, I give the hospitality an A+ in both regions.

Back in 2018, I was blessed with opportunity to visit some long-neck Karen tribes in the northern hill regions of Myanmar’s Shan state. Walking through these villages felt like going back in time, as these individuals still practice the same centuries-old traditions that their ancestors did. I was able to meet and talk with such interesting people that it, still today, remains one of my favorite travel memories. 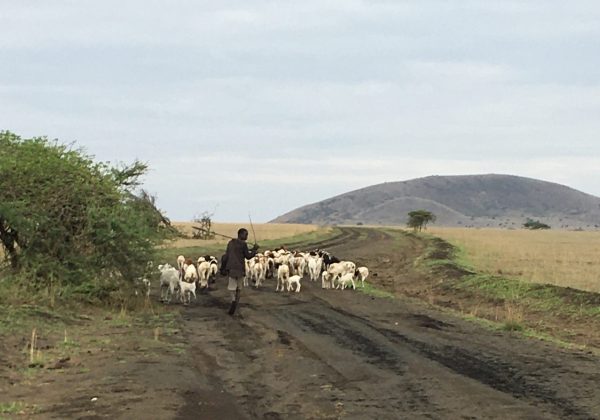 I was wondering whether I would encounter something similarly authentic while on safari. Believing that most lodges were far removed from civilization in order to provide the best animal viewing, I wasn’t optimistic. But then, on my first game drive I saw…goats! Yes – we had just passed a Maasai and his livestock, looking for grazing land. Our guide explained that this year, the national park had passed a special exception to allow grazing inside its boundaries due to extreme droughts in the north. It was at this moment that I learned that towns and communities exist much closer to this vast wilderness than I had previously thought.

In fact, many lodges in Eastern Africa often offer interactive experience with the local communities. At Ol Donyo, we were driven a bit over an hour to visit some Maasai women whose main income derives from selling intricate traditional beadwork. After welcoming us with a beautiful song and dance (I could get used to this), they explained the ways in which their lives remain steeped in ancient traditions. They reside in small huts self-crafted out of cow dung, their diet consists of beef, goat, milk and blood, and, once their husbands pass, they remain widows for the rest of their lives. When we asked if they’d ever move to Nairobi or another city, they all gave us a resounding “no.” 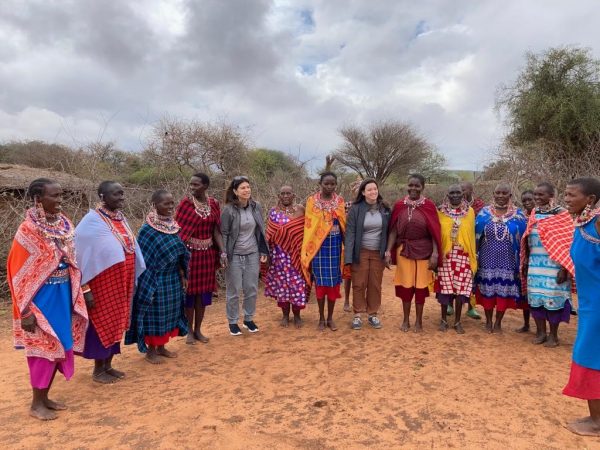 Even if you don’t get the chance to visit a Maasai community while in Kenya, you can still learn about their culture through conversations with camp staff. I was pleased to know that all of our guides were from the local villages. When I would ask them where, they would often gesture to the nearby hills in response.

It was apparent to me how well they knew the landscape when one of our guides calmly stopped our vehicle, pointed somewhere on the horizon, and said “look – there are black rhinos mating.” I squeezed my eyes to look. Nothing. I took out the binoculars and really focused. I saw…a dot? A blob? Was it even moving? I don’t know. But sure enough, later at camp, travelers in another vehicle were raving about how they witnessed black rhinos mating. Our guide had seen something so clearly, with his naked eye that I, even with glasses and binoculars, could not. There is truly something different about those that grew up in the African bush – so I implore anyone that finds themselves on safari to take the time to learn and ask as much about the people as they do about the wildlife. You won’t be disappointed.

During my trips to Southeast Asia, I have twice visited elephant sanctuaries. These serve as a refuge for former logging elephants, as a place where they can enjoy the remainder of their days frolicking in the water and searching the jungle for food. Visitors have the opportunity to feed and interact with these gentle giants in ethical, safe, and fun ways, with the elephants retaining as natural a life as possible (no riding, no “tricks,” etc.). Having the opportunity to walk alongside a pair of elephants as they played — picking up leaves and putting them on their head — was one of the most magical moments of my life. 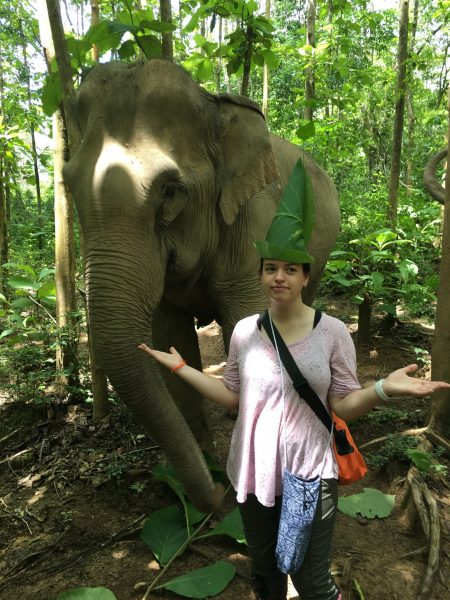 While on a safari, you don’t necessarily get to directly interact with the elephants. But that didn’t really matter. Because seeing a herd of African elephants foraging for food and splashing in the mud is simply a feast for the eyes and the soul. I could spend hours just watching them do much of nothing, really. And of course, Africa is more than just these pachyderms. It is lions, cheetahs, leopards, many different kinds of antelopes, baboons, rhinos, buffalo, hippo, and surprisingly colorful birds. If you are an animal lover, there is nothing quite like Africa. 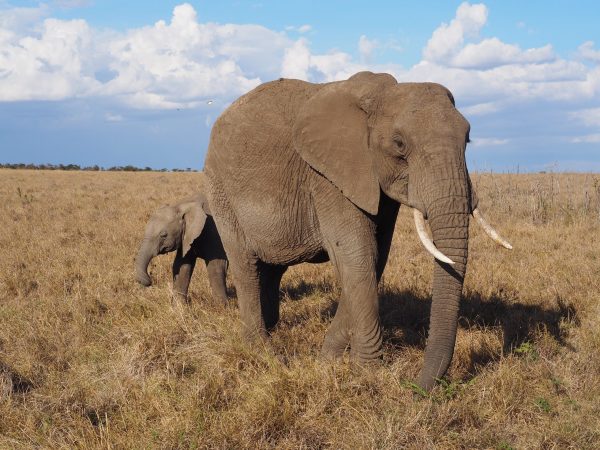 So, while I am still patiently waiting for my return to Asia, my trip to Kenya was the perfect way to satisfy my travel bug. Whether it is the friendly people, the unique and fascinating cultures, or that feeling of becoming one with a world vastly different from your own – both Asia and Africa have it all. They leave me with my heart feeling full in a way that other destinations do not. So, if you feel like now is the perfect time to travel (like I always do), maybe an African safari is calling your name!