While spending time at Singita Lebombo Lodge in April 2022, I got to meet Chantelle Venter. A female career- and head- guide at the lodge, she’s found great success in an often male-dominated profession. While together, I took a bit of time to ask some questions, to get her story and hear her perspective. Here are her responses:

Q: How did you become a guide? What has been your professional trajectory?

About 26 years ago, my partner Brian and I got our start working in the kitchen at a lodge in the Timbavati Game Reserve, as there were not many female guides at that time. I was not a chef, but I could cook, and the food was a lot more basic than it is now. While there I also helped with housekeeping and management, doing a bit of everything. I was also, and often, driving guests to help the guides out, and I enjoyed it much more than being in the kitchen. I started learning about trees by working at an indigenous nursery and about birds from Brian, since he really enjoys birds. 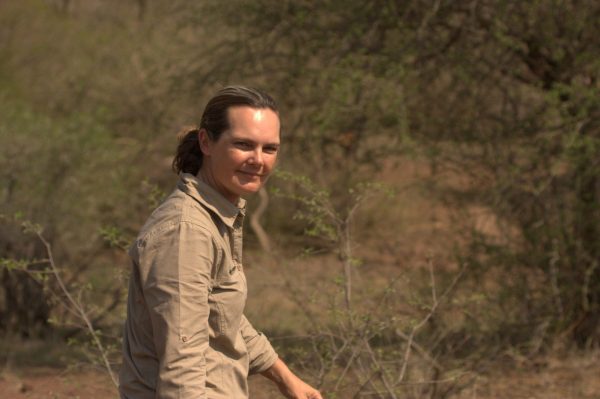 I then began inquiring after other positions. At this point, I wanted to go into guiding but kept hearing “No, that is not really done.” I went for an interview with a company that was hiring female guides at the time, but that didn’t really work out. I kept learning on my own and got a lot of support from other guides. I was learning how to drive a 4×4 and joined on walks and drives whenever I could. Eventually, I reached a point when I would go out on my own with a radio.

Then one day I was in the right place at the right time, when one of the guides came down with Malaria and needed someone to bring guests out on a game drive that afternoon. Brian suggested that I take the guests out, explaining that I was ready and could handle it seriously. They agreed but sent a manager along to babysit. The guests and vehicle came back in one piece and the guests were happy.

In those days, guiding was not very formalized. But when the formal qualifications started coming through, Brian encouraged me to take those as far as I could, and I did. In the meantime, I was offered a half-and-half role because the lodge was not quite ready to give me the title of “Guide.”  I really had a lot of support from a lot of people which really helped. Finally, I got qualified.

As a couple, Brian and I often moved. At each place I would get hired as a manager and then mention that I was also a qualified guide. So, when they were short a guide, I would jump in to assist and that sort of helped me work my way into the position. As time went on, they were starting to hire more female guides, so it became easier. 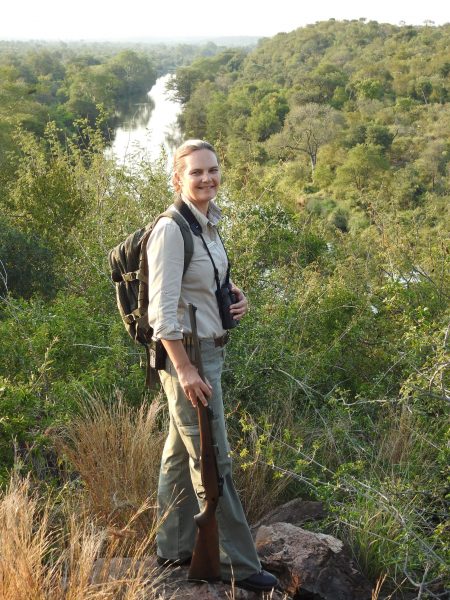 There are three basic levels of professional guiding, as well as specialist qualifications. I have the three levels (bronze, silver, and gold), as well as a specialty in birding and dangerous game. The latter is quite a long qualification because it is linked to how many hours you have walked and how many dangerous animals you have encountered. I don’t know how many in total, but I have probably spent a couple of thousand hours of walking and had a couple thousand encounters. I’ve stopped counting but know you cannot really achieve the qualification in less than 7-10 years.

Q: What’s it like to be a female guide? It sounds like you had to continually work to get hired.

Yes, well it wasn’t that big of a deal. I think we are all guilty of saying certain roles are for men and for women. The biggest thing was to not have a chip on my shoulder, and to remember that I was going to get grief; there were days when I was tested more, and comments were thrown. But it’s okay. Everyone gets a little bit of this and that thrown at them for something. You just have to go with it, not make a big deal of it, and carry on. The people who have been most supportive of me have been males guides. 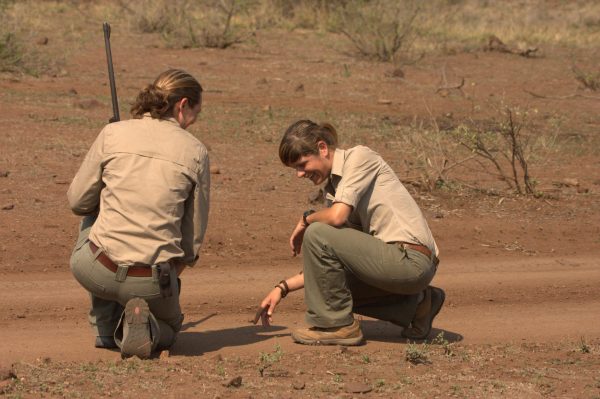 Q: How many female guides are at Singita properties?

There are currently four at the Kruger properties, one at the Sabi Sand properties, and they are looking to hire more. The biggest obstacle is that many guides want families, and you can’t really do both. Brian and I are some of the last career guides left in the industry.

But nowadays, some guests do put in a request for females guides. You will start seeing it more and more. People are also commenting on the presence of female guides, so we are attracting more. A lot of males even mention they feel females make better guides as they tend to have more patience and empathy. While everyone has their own style, I think we (females) have a bit more of an advantage, not disadvantage. 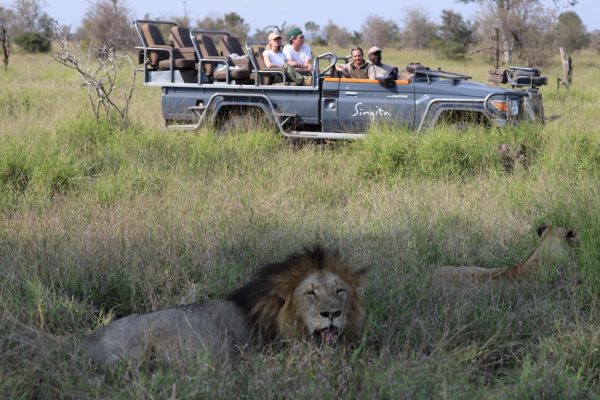 Q: What is your favorite part of guiding?

The people! Seeing how excited they get and meeting different people, it’s almost like traveling.  You get people from different religious backgrounds, different cultural backgrounds, and that is so interesting to me. I try to understand how they think and get to see life from a broad point of view. Interacting with guests is what we missed most during the COVID lockdown. We were still operating, training, and doing security in the area, but had no visitors. Sometimes I’d be driving by myself, come across a lion or leopard, and would be so excited and exclaim “whoa!” only to realize I didn’t have anyone in my jeep to share it with and that’s the biggest thing – sharing with people. We are often seeing things others can only read about in books or have never been recorded before.

Q: What one memory stands out as the most wow, crazy or incredible moment in your career?

It was many years ago and I had been guiding for about 5 years by then. We didn’t have any guests at camp and had a new chef and mechanic.  So, one evening I invited them to my house. While visiting, a lion began roaring outside, and we could hear it getting closer and closer. It was a very old home, and the windows would rattle when he would roar.

I eventually told the chef and mechanic that they need to go home; but they said, “No way! You need to check outside because we just heard that lion 20 minutes ago. You are the guide; you need to check.” I said, okay and opened the door leading to a small porch, which had its own screen door, one that was flimsy and opened inwards. 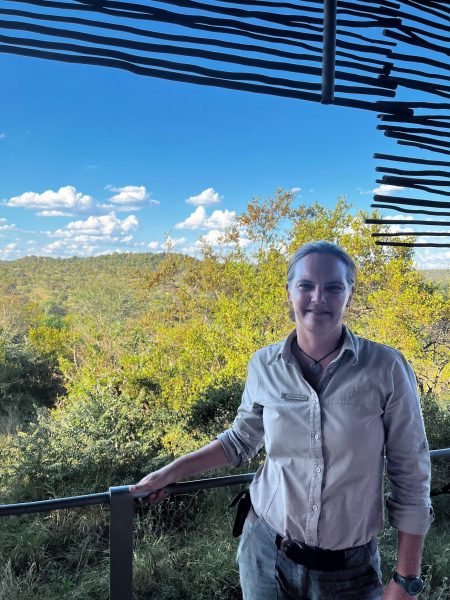 As I stepped onto the porch, I heard this commotion, and a male lion jumped up. He was notoriously very grumpy and was surprised to see a human just 1.5 meters (5 feet) away. He’d literally been laying down in front of the screen door, like a dog. But upon my arrival, he jumped up and charged. I had never been approached by a lion at night, because most charges happened during the day and cats and hyenas are a little bit more confident and scarier after dark.

Amazingly, he was so big he could not fit through the opening.  But he was repeatedly hitting the flimsy screen door that I was holding with my foot. I then hear the house door shut behind me, the guys locking me out of the house screaming “we’re going to die!” In response, I yell “Open the door!” as I was trying to get back into the house. My hand remained on the doorknob as the lion kept charging and charging. The chef and mechanic were convinced that I was dead! 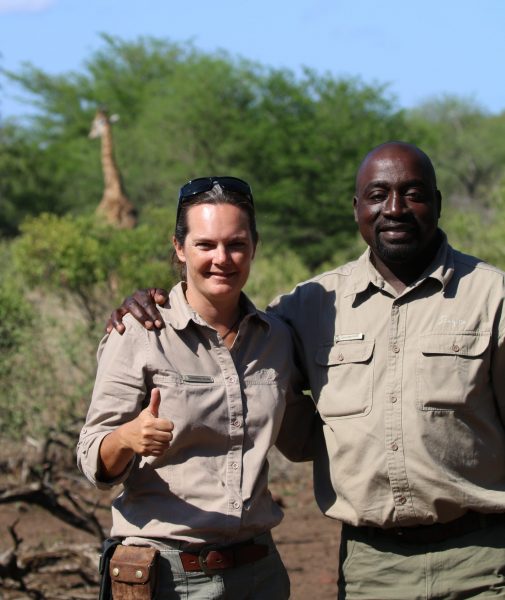 Eventually the lion got sick of charging me. There were nomadic male lions calling in the distance, so he decided that he had enough of me and got distracted. After another 20 minutes, I finally convinced the guys in the house that the lion was gone, and realizing I was alive, they let me back in the house.

Not only did I have this close encounter, during which there was basically nothing I could do, I then had to escort those guys back to their rooms after they’d locked me out! You know, you’re not really scared at the time; but I think afterwards, when you sit down, your knees get a little shaky, and you need to take a deep breath. When it’s happening, you’ve got to stay optimistic.