One morning, in the late 1990s, Douglas and Kristine Tompkins made a promise to themselves. Looking out over Chile’s Chacabuco Valley, over land that for decades had been ranched and run ragged by livestock, they vowed that somehow, someway they would turn this region into a national park. In that moment, so in awe of the valley’s beauty, and fearful of its continued depletion, they understood wholeheartedly the need to protect it, to restore its wildness, and to preserve the flora and fauna who called it home.

Their vision, this commitment, took its first step toward becoming a reality in 2004 when Patagonia Conservation, the couple’s nonprofit, with support from a few additional donors, acquired the land in and around the valley. Purchased from a Belgian landowner named Francoise de Smet, the couple wasted no time launching their first efforts to rewild, to return the land to its original majesty. They slowly sold off the property’s more than 6,000 sheep. They launched volunteer programs to remove fences and reopen migratory pathways. They planted native trees to promote soil health. Animals started to return. Vegetation once again began to grow. Progress was undeniably being made. 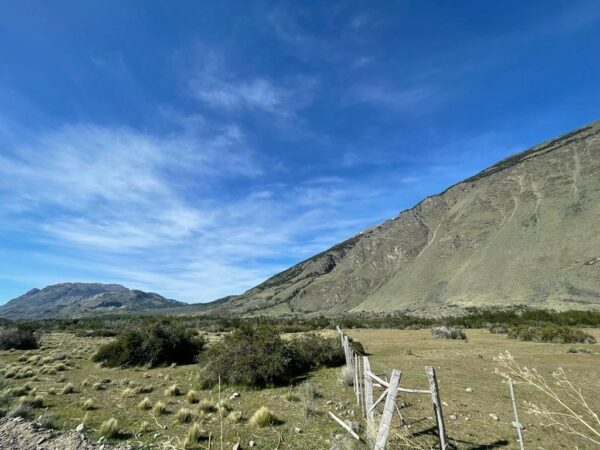 It wasn’t however, until the untimely death of Douglas Tompkins in 2018 that the Chacabuco Valley officially became a national park. Knowing it had been his dream, the family, alongside their nonprofit now known as Tompkins Conservation, approached the Chilean government to begin discussions around land donation.  Wanting to protect as much terrain as possible, Kristine set very specific terms, the most notable being that the government would have to add additional public land to the 207,000 acres they’d give. The reserves of Tamango and Jeinimeni were thus included, expanding the protected land to a total of 752,504 acres and establishing the boundaries of what is now Patagonia National Park. 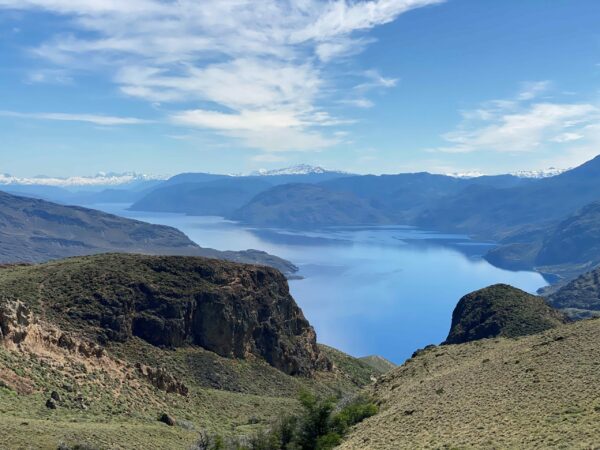 The negotiations also centered on who would manage the new park and how it would be run. It was agreed that CONAF, the National Forestry Corporation in Chile, would be in charge of the park’s trails and campsites. Then, for its part, Rewilding Chile, a now independent arm of Tompkins Conservation, would remain the stewards of the area’s flora and fauna —monitoring wildlife populations, restoring landscapes, and running all other projects centered on the rewilding of the land.

On a recent trip to Chile, my colleague Kayla Torgerson and I had the opportunity to visit this national park. Staying at Explora Lodge, we spent three days adventuring throughout the valley and its surroundings, all the while learning about Tompkins Conservation and Rewilding Chile. We heard about the initiatives in place to preserve the region, and, even more powerfully, saw firsthand the results of those programs. Through these conversations and our excursions, it proved impossible to not only come to deeply understand the importance of the work being done but to unequivocally fall in love with the land itself. 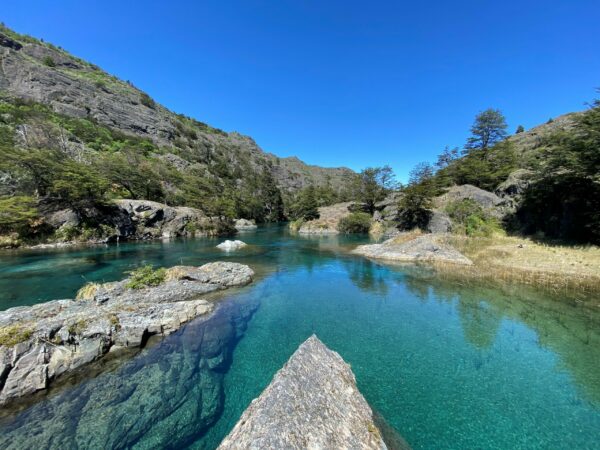 One such project run by Rewilding Chile is known as Puesto Puma, or the Puma Hut. Based in the western part of the park, the initiative is run by Don Arsilio, a local man whose story of transformation is almost as incredible as the conservation work being done to protect this elusive cat. During the days of ranching, the puma was considered livestock’s greatest enemy and because of this, landowners often hired people to kill them. Don Arsilio was one such individual, who used his ever-growing knowledge of the puma to hunt them.

When the land was acquired by Tompkins, the couple saw great value in his expertise and hired him to continue tracking the puma, but now for protection rather than predation. Understanding their behaviors and their movement, Don Arsilio evolved from shooting these incredible felines to collaring them, from reducing their populations to preserving them. Using both camera traps and the collars’ telemetry, he now spends his days tacking and monitoring the park’s pumas while guard dogs, provided by the nonprofit, patrol nearby ranches to help ensure the safety of livestock and reduce human-wildlife conflict. 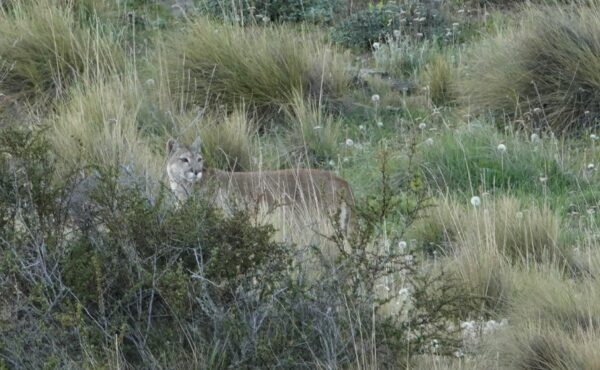 The impact of Rewilding Chile and Don Arsilio’s efforts can be seen readily throughout the park and there proved no better reflection of progress than the encounter I had on our final morning at Explora. We’d been told throughout our stay that these elusive cats could be seen near the lodge, and so I woke up early and set off on foot to test my luck. And after just ten minutes walking, not more than half a mile from my room, I heard a group of nearby guanacos (similar to a llama) sounding an alarm. Clearly agitated, I knew there had to be something, somewhere, that was making them nervous.

And sure enough, less than 100 yards to my left, out from behind a rustling bush, emerged a solitary puma. I stood absolutely astounded, at both its beauty and my good fortune, when to my utter disbelief a second and then third puma appeared (a mother and two grown cubs, I’d later learn). Here I was, surrounded by pristine mountains, guanaco alarm bells carrying in the breeze, watching not just one, but three pumas expertly maneuver through the brush. I’ve never been in such awe of the natural world and its ability to rejuvenate itself in my entire life! 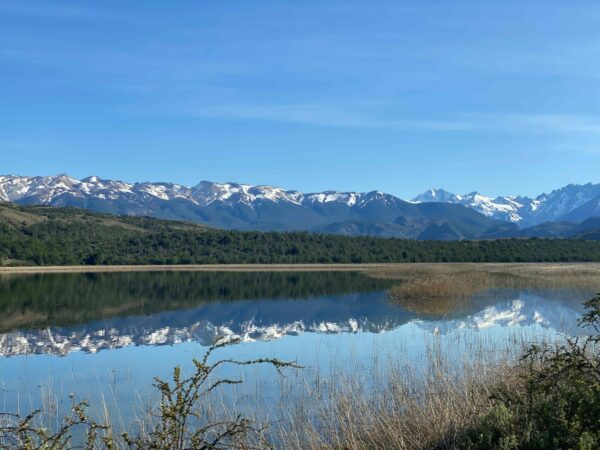 Other Rewilding Chile initiatives focus on the repopulation of three additional species important to the region’s ecosystem. In the southern and northern regions of the park, Rewilding Chile employs Daniel Velasquez and Chino to monitor the huemul, or Andean deer. Extremely sensitive to change in the environment, the project’s goal is the re-establish the animal’s migratory corridor and, in doing so, increase their numbers.  Puesto Choique, for its part, tracks the nandu, or rhea, an ostrich-like bird whose numbers had fallen to just three. Through a combination of strategic reproduction and release and diligent monitoring, the most recent census counted forty. And just this past February, the nonprofit released two condors, in an effort to revitalize their populations as well.

Regardless of the project, Rewilding believes in the importance of hiring locals to lead Patagonia National Park’s conservation. With the culture of ranching so engrained in the nearby communities, the nonprofit’s progress is dependent on education, on changing people’s understanding of not only environmental protection but local economics. Their employment of community members creates not only trust, but also ambassadors who can continue to spread the mission throughout the valley.

Heading home from our final full day excursion at Explora, a hike around the spectacular Lago Chico, we drove past the campsite, the precise location where Douglas and Kristine Tompkins made that incredible declaration more than twenty years ago. Now named Picaflor y Aguila (hummingbird and eagle), it stands in homage to a couple who forever changed the landscape of Patagonia. Generations from now, visitors will be able to look out over the same jagged mountain peaks and kayak through the same turquoise waters. They’ll spot puma wandering through the steppe and Andean deer hiding in the forests. Each and every person who sets foot within the park’s boundaries will revel in the magic of this place, value the incredible efforts in place to protect it, and feel the passion of Douglas and Kristine Tompkins radiating throughout it all. 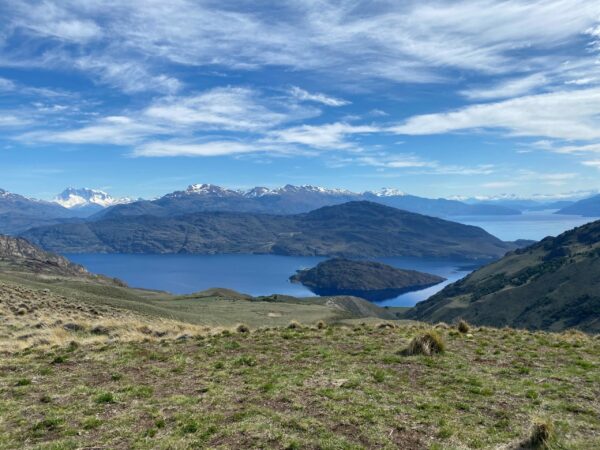