Experience the delightful city of Quito at your own pace before heading to the spectacular Galápagos Islands where you will board the M/Y Grace. Lounge with sea lions on the beach, snorkel with sea turtles, witness the giant tortoise in its only natural habitat, and photograph the unique species of Galápagos birds in one of the world's top wildlife viewing destinations. 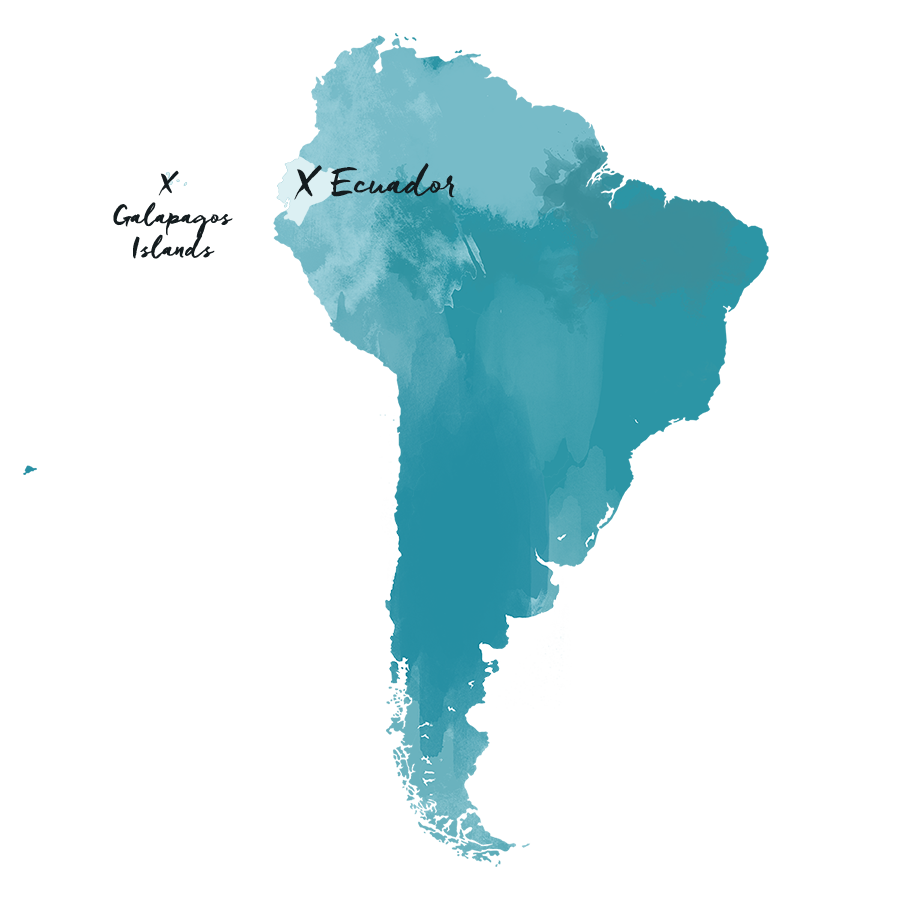 At Travel Beyond, we believe your trip should be designed just for you, not for the masses. Our travel consultants create a custom itinerary for each client, offering recommendations for places and experiences that best fit your style. The itinerary below was planned for a past client, but we’re sharing it for travel inspiration and as an example of what a trip to Quito and The Galápagos Islands might look like. Let us know when we can design a trip just for you!

Welcome to Ecuador! Upon arrival in Quito you will be met for your private transfer to Casa Gangotena in the charming old city. Accommodations will be reserved for two nights, including breakfast daily.

This morning after breakfast, you will be met by your private guide, who will be with you for a full day of touring.

You will spend the day exploring the charming city of Quito. You can discuss your interests with your guides and customize your visits based on your personal preferences. Lunch will be served during the day at a small family owned restaurant that specializes on traditional cuisine from the Coastal areas. Choose the visits/activities that best suit your interests among the following choices.

Depending on the visits you choose, you will be able to participate in up to 3-4 of the following:

Following your visits, you will be transferred back to the hotel. Enjoy the remainder of your day at leisure.

This morning you will be met for your private transfer to the Quito Airport for your flight to the Galápagos.

Upon arrival at the Baltra  Airport in the Galápagos, you will be transferred to the M/Y Grace, your home for the next seven nights. Upon boarding, you will check in to your cabin before an introductory briefing and safety drill.

This afternoon, you will circumnavigate Daphne Major Islet which is home to a variety of birds including Galapagos martins, blue footed boobies, Nazca boobies, short eared owls, red billed tropic birds among others. Dinner will be served on board.

This morning after breakfast, you will set off to visit Santa Fe Island, home to one of the most beautiful and sheltered bays of the archipelago. Its crystal clear waters provide visitors with some of the region’s best snorkeling. Beneath the ocean’s surface, you’ll catch sight of sea turtles, swim with sea lions and get a glimpse of the Galapagos White-tipped Shark. Afterwards you will walk through an area of Opuntia Cactus on Santa Fe Island to reach a nearby cliff. Here you will find numerous land iguanas. 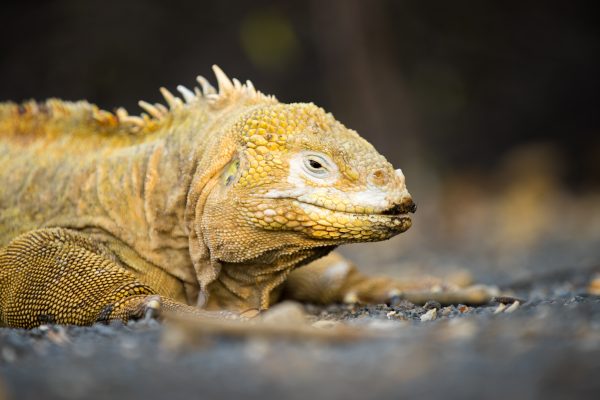 Following lunch back onboard the M/Y Grace, you will spend the afternoon exploring South Plaza, one of the smallest yet most colorful islands in the Galapagos. Yellow land iguanas wander through bright red carpet weed, waiting for prickly pears to drop from green cactus. Orange sally lightfoot crabs dot the blackened lava above the landing site, all surrounded by turquoise waters. You’ll see swallow tailed gulls nesting along the up-tilted end of the tiny island, while red-billed tropicbirds, frigatebirds and shearwaters fly in dancing displays. You also have the chance to see blue footed boobies along the cliff’s edge. 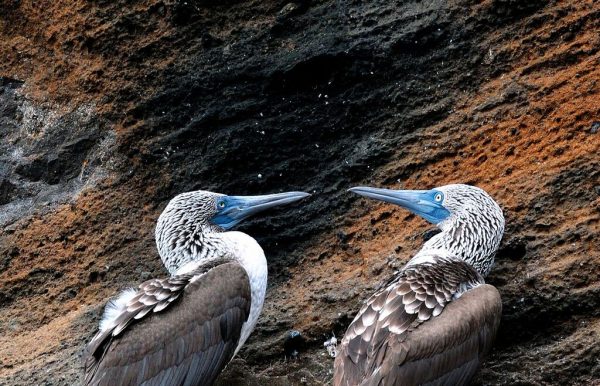 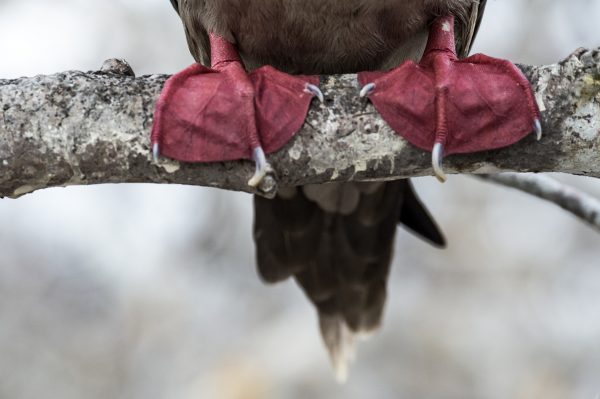 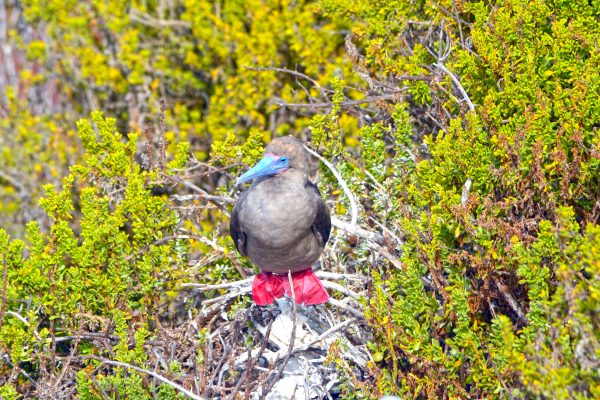 Your day begins with an exploration of Tower Island. Sitting to the northwest, slightly removed from the rest of the archipelago, the island’s southern part is an ocean-filled caldera of a sizeable and mostly submerged volcano. Known as “Bird Island,” it certainly lives up to it in a spectacular way.

The first stop is to Prince Phillips Steps, the best location to see red footed boobies, who  comically perch by wrapping their big red feet around tiny branches. You’ll walk a short distance to seek out short eared owls known to be hunting swarms of storm petrels. The snorkeling at the foot of the steps is also encouraged, as you’ll encounter  large, brightly colored tropical fish which take on a neon quality against the black lava background.

After lunch, take time to kayak beside the walls of the sunken caldera before an afternoon visit to Darwin Bay. Here a gorgeous tidal grotto forms a picturesque backdrop to the gaggle of nesting and soaring seabirds birds who call this bay home. Follow a path up to the rookery cliffs for views of the bay and colonies of gulls, tropic birds and frigates.

In the morning, you will explore Fernandina Island, home to the La Cumbre volcano, which erupts frequently (most recently in May 2005). Its recent lava flows stretch their way around the coast. On shore, you will make your way to Punta Espinoza, a narrow spit of land, where a number of unique species, such as marine iguanas, sea lions, flightless cormorants, herons, egrets and Galapagos hawks can be seen in close proximity. 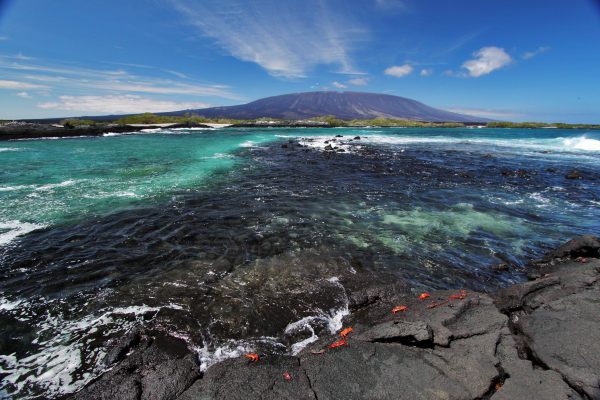 Lunch will be served back on board the M/Y Grace after which you will visit Urbina Bay. Sitting directly west of Isabela’s Volcano Alcedo, you will make an easy, wet landing (a hop into a few inches of water) and walk along a three mile stretch of marine reef that has been lifted above the water by as much as 13 feet. A highlight of this excursion is sightings of the giant land iguanas and giant tortoises, as well as the opportunity to either go snorkeling among marine creatures or relax on shore.

Your day starts with a visit to Tagus Cove on Isabela Island. Here, a wooden stairway rises to the trail entrance and continues around Darwin Lake. You will pass through a dry vegetation zone and end in a promontory (elevated piece of land that extends out into water) formed by spatter cones. The site provides spectacular views of the Grace’s anchorage in the bay, as well as Darwin and Wolf Volcanoes. The Cove’s pastures of underwater green algae offer the chance to snorkel with marine iguanas, sea turtles, penguins and sea horses. 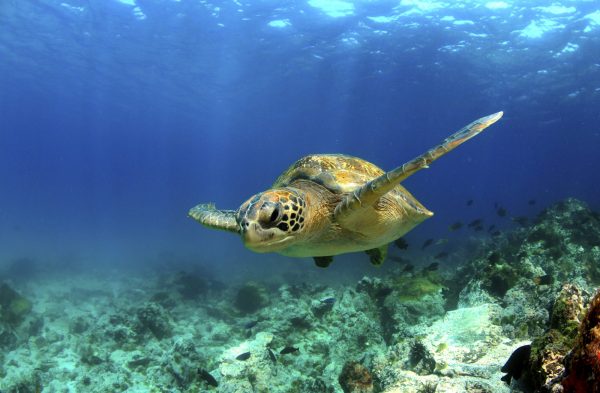 In the afternoon you will visit Punta Vicente Roca, also located on Isabela Island. As a result of the nutrient-rich waters of the Humboldt Current, snorkeling is incredible here. You’ll have the chance to see colorful fish, sea lions, penguins and sea turtles in the water.

This morning you will set off to explore Buccaneer’s cove. A short walk up the beach leads inland to a mangrove typically inhabited by Common stilts. Beyond the mangroves is a brackish lagoon where flocks of pink flamingos and white cheeked pintails wade in search of mollusks. The trail passes over a tiny hilltop through a sparse Palo Santo forest before looping back to the beach. Galapagos finches and Vermilion fly catchers inhabit the area. The tuff formations that form the cliffs surrounding the cove have created a natural sculpture gallery rising from the sea. Formations include the Monk and Elephant Rock. 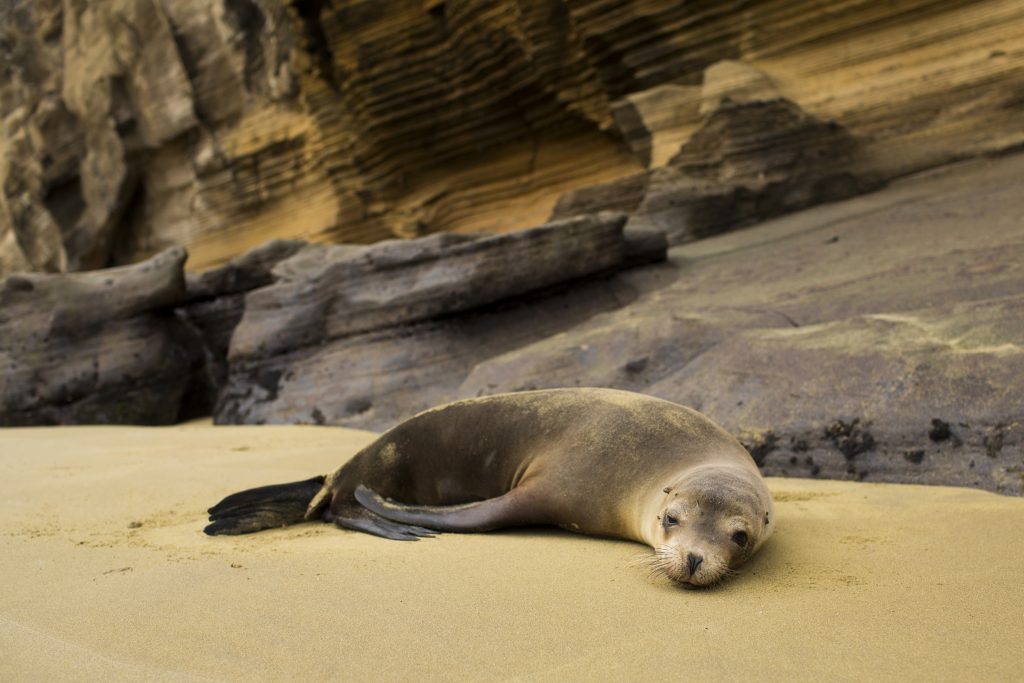 Following lunch, you will visit James Bay, where you land on a black beach doted with eroded rock formations. A path leads to a series of crystal-clear grottos and a natural bridge formed of broken lava tubes. This is the best place in the Galapagos to see fur seals and  marine iguanas feeding in tidal pools nearby. You will also find a colony of sea lions and Galapagos hawk frequent the area. Snorkeling offers encounters with Green Sea Turtles and tropical fish.

Disembark at Puerto Ayora on Santa Cruz Island, the social heart of the Galápagos. This morning you will visit the Centro de Crianza Fausto Llerena (formerly known as the Charles Darwin Research Station). Scientists arrive here from all over the globe conduct biological research, from anatomy to zoology. Visit the tortoise corals and the breeding center with hatchlings and miniature tortoises that will be repatriated when grown. Visit the new exhibit honoring Lonesome George, the last surviving tortoise from Pinta Island and a worldwide icon of conservation, who died of natural causes in 2012. 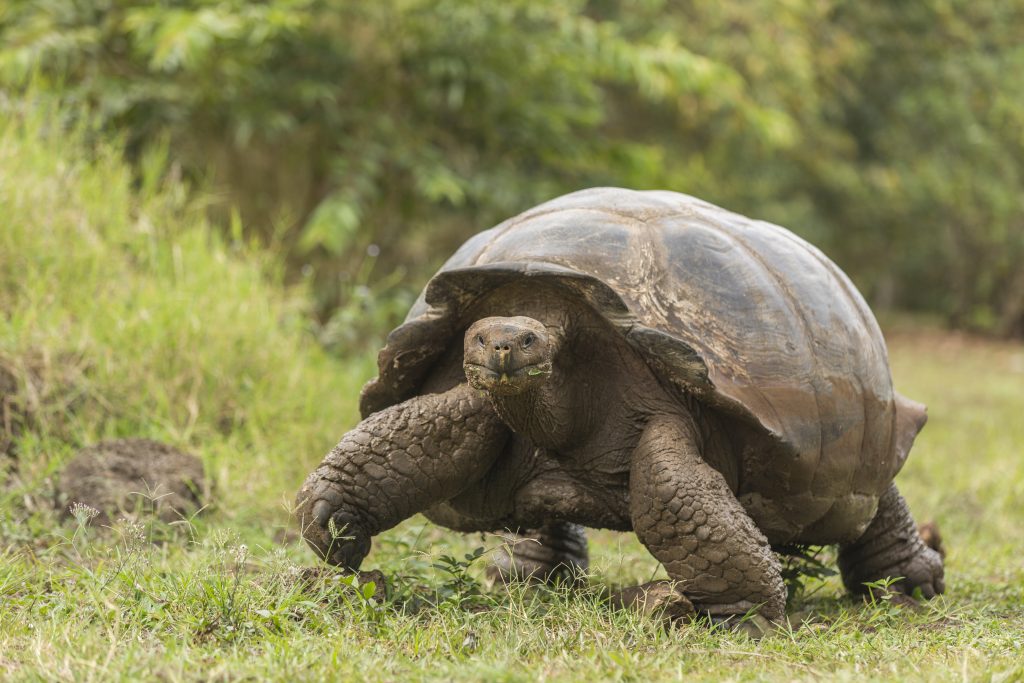 This afternoon you will travel by bus to the highlands, where the dry coastal vegetation transitions to lush wet fields and forests overgrown with moss and lichens. Our destination is the Tortoise Reserve, where we will have chances see these animals in the wild.

Back in Puerto Ayora, you can stroll through town to shop for souvenirs or stop at an internet café. Return to the M/Y Grace for dinner or, if you wish, remain ashore for dinner on your own. Panga shuttles to and from the M/V Grace to the main dock will be offered throughout the evening.

This morning after breakfast, you will travel by bus to the Galapagos National Park Visitor Center, which displays a comprehensive exhibit of the islands’ natural history, human interaction, ecosystems, flora & fauna. From the Center, a short trail brings you to Frigate Bird Hill, where both “magnificent-frigates” and “great-frigates” can be seen in the same colony.

Afterward, you will head to the airport for your flight back to Quito. Upon arrival in Quito, you will make your way to your connecting flights home. 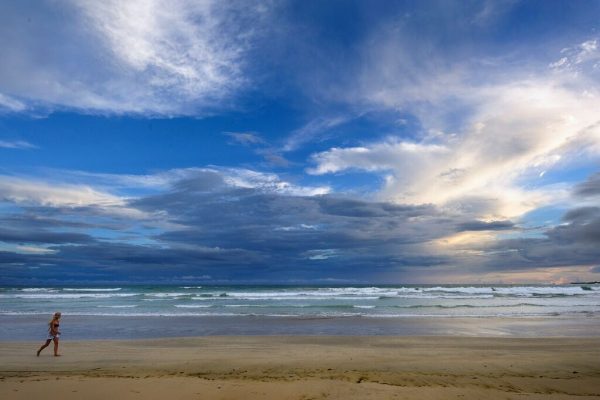 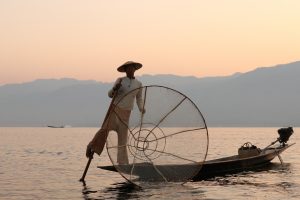 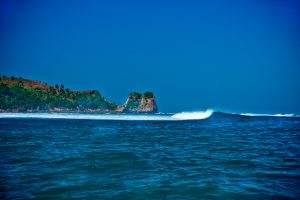 Extend your time in paradise