Explore Cambodia in all its beauty and mystical charm! Visits to Angkor and Phnom Penh are on nearly all visitor's lists and you will love discovering their unique allure. A few days enjoying warm Cambodian water on tropical Krabey Island is a great way to relax after the bustle of touring and exploration. Get the full Cambodian experience with a visit to some of its oldest and most important national parks for endless outdoor activities. 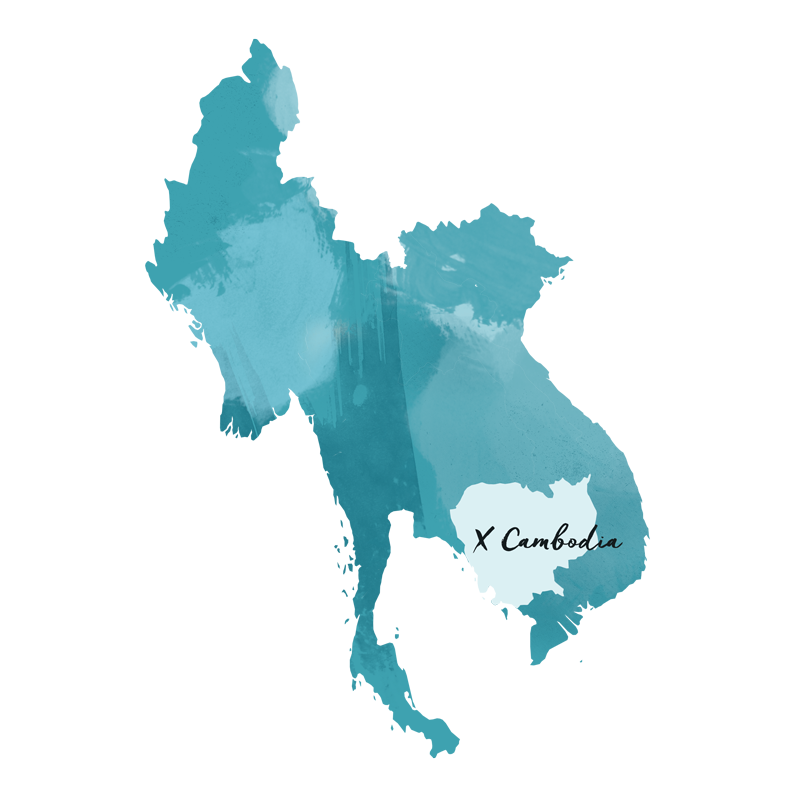 At Travel Beyond, we believe your trip should be designed just for you, not for the masses. Our travel consultants create a custom itinerary for each client, offering recommendations for places and experiences that best fit your style. The itinerary below was planned for a past client, but we’re sharing it for travel inspiration and as an example of what a trip to Cambodia might look like. Let us know when we can design a trip just for you!

Welcome to Cambodia! Upon arrival in Phnom Penh, you will be met for your private transfer to the Rosewood Hotel, where you will stay for two nights in an Executive Room, including breakfast daily.

Soaring above Phnom Penh’s business district, the Rosewood occupies the top 14 floors of Vattanac Capital Tower, the city’s most iconic modern structure and a symbol of the ‘new’ Cambodia. You will find the hotel is the ideal place from which to explore the heart of the country’s cultural, economic and political activity.

Enjoy the remainder of your day at leisure.

This morning after breakfast, you will met for your day of touring in Phnom Penh. You will depart the hotel on cyclo (a three-wheeled bicycle, driven by your experienced guide) and will visit some of the city’s most important sites.

Start at the Royal Palace, built in 1866 by King Norodom and home to the ‘Silver Pagoda,’ so named because of its floor which is made up of 5,000 silver tiles. You will be fascinated as you explore the priceless treasures housed here! Continue to the National Museum, which houses Cambodia’s most cherished art. Over 5000 objects are on display, including Angkor-era statues as well as a collection of pieces from later periods.

Take a break for a true Cambodian lunch at a local restaurant before heading to Champei Academic Arts, a local non-profit school teaching traditional Cambodian performing arts in order to pass this knowledge to future generations.

Next, your guide will drive you to the Toul Sleng Genocide Museum (also known as S-21). Once a high school in the suburbs of Phnom Penh, the Khmer Rouge converted it to a detention and torture center during the genocide of the 1970s. 17,000 people passed through the gates of this prison and only a handful survived to tell the tale. Just two are alive today and you will meet one, who will share their personal story. This is an poignant experience that will draw you even closer to the people of Cambodia and their difficult history.

Upon completion of your tour, you will be returned to your hotel to spend the remainder of your day at leisure.

This morning you will depart on your commercial flight to Siem Reap. Upon arrival, you will be met for your private transfer to Jaya House, where you will stay for four nights in a Junior Suite, including breakfast daily. You will then have free time to freshen up and enjoy time at the hotel.

Jaya House is peacefully located alongside the Siem Reap River, surrounded by fully grown trees This is small hotel is truly is a hidden gem! With only 36 rooms, it boasts two swimming pools, a spa, an all-day-dining restaurant and is just a six-minute tuk-tuk journey to town.

You’ll also receive a reusable metal water bottle on arrival, as part of the Refill not Landfill initiative Jaya House launched in 2016 to reduce plastic waste. Be sure to bring yours with you while exploring because you can replenish your water at any of the free stations located throughout Siem Reap. With more than 40 participating partners, you’re bound to stay quite hydrated!

This afternoon you will be met for your private transfer to Angkor Wat. En route, you will make an interesting stop at the APOPO Hero Rat Demining Center. APOPO is a special NGO working with African Giant Pouched Rats (also known as ‘Hero Rats’), who detect landmines using their extraordinary sense of smell. The Hero Rats are too light to detonate landmines and their efforts are helping to clear rural areas of landmines after decades of conflict. They never work for longer than four hours a day and even have sunscreen applied to their ears and tails while on duty! These heroes typically retire after four years of valuable service.

Continue to the crown jewel of Cambodia, Angkor Wat. This is the largest, best preserved, and most religiously significant of the Angkor temples, but unlike all other Khmer temples, it faces west and is inspired by 12th Century Hinduism. Angkor Wat took an estimated 30 years to build and is generally believed to have been a funeral temple for the king. It has been occupied continuously by Buddhist monks and its symmetrical towers are stylized on the modern Cambodian flag.

After your visit, embark on a beautiful sunset dinner cruise on Tonle Sap lake. Enjoy canapes and sip champagne on your private cruise on the largest freshwater lake in Southeast Asia.

Today you will transfer to a special breakfast at a traditional Khmer house in front of the Srah Srang Reservoir.

After, you will head to Banteay Srei, a tiny, enchanting temple and one of the jewels in this remarkable city. Built of red sandstone in the tenth century and dedicated to the Hindu god Shiva, the carved male and female figures in the niches are exquisitely executed in both style and proportion. Continue to Banteay Samre. Built in the early 12th century, it is a Hindu temple in style of Angkor Wat and named after the Samre, an ancient people of Indochina.

Return to Siem Reap for lunch at a local restaurant, before continuing to Angkor Thom. This was the last capital of the Khmers and is made up of the famous Elephant Terrace, the Terrace of the Leper King and the stunning Bayon temple. This 12th century masterpiece lies at the very centre of Angkor Thom and is an archaeological wonder of symmetry and grandeur.

Upon completion of your tour, you will be returned to your hotel to enjoy the remainder of your day at leisure.

Today after breakfast you will visit Ta Prohm, a temple that has largely been left in its natural state since its ‘re-discovery’ by French explorers. Surrounded by jungle, its labyrinth of stone hallways is overgrown with the roots and limbs of massive banyan trees, which envelop the stone like tentacles. It is one of the largest temples at Angkor and historians have long noted its mystical charm. Continue to Preah Khan, ‘The Sacred Sword,’ an extensive monastic complex covering over 56 hectares.

Return to Siem Reap for lunch at local restaurant and enjoy your afternoon at leisure.

Later this afternoon, you will be met for a tasting tour of some of Siem Reap’s most popular dishes! Khmer cuisine is one of the true pleasures of any visit to Cambodia and renowned chefs are sharing their talents at exciting new venues across the city. Visit several during your ‘dine around’ showcasing hot spots, artists ateliers, good cause training restaurants, creative fusion and the best soufflé Amok in town!

Enjoy the remainder of your day at leisure. Dinner will be served at the resort. 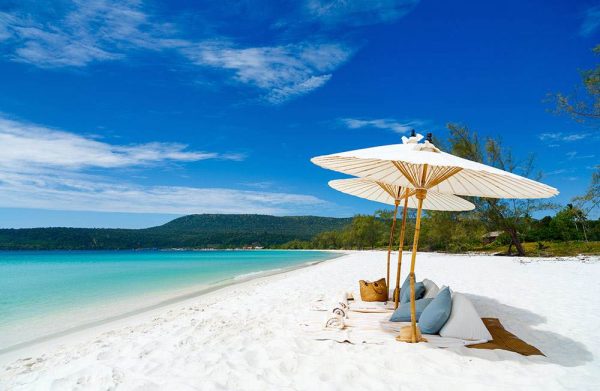 Enjoy your days at leisure to explore Song Saa Island and the activities on offer. Navigate the crystal clear waters on a kayak or paddle board, grab a snorkel and mask and see what marine life awaits below the surface, or spend an afternoon relaxing on the beach. The possibilities are endless. All meals will be served at the resort.

Today you will board a speedboat for your return to the mainland. You will then travel north to Shinta Mani Wild resort, where you will stay for three nights in a Wild Tent Room, including all meals. Enjoy the remainder of your day at leisure, exploring the resort.

Kirirom, Bokor, and Cardamom are three of Cambodia’s oldest and most important parks and together they make up one of the greatest wilderness areas in Southeast Asia. A wild coast of pristine estuaries gives way to a mountain range covered in rainforest that is one of the few remaining habitats in Cambodia for wild elephants, gibbons and numerous other species. This sparsely populated frontier is also home to Shinta Mani Wild, a private nature sanctuary, and your home for the next three nights. Custom designed tents are perched over the swift moving waters and waterfalls, providing stellar views and unique experiences.

Enjoy your days at leisure!

A luxury adventure driven by creative experiences, you will have more activity options than time to do them! Depending on your interests, you may want to explore the untrammeled waterways of Southeast Asia’s last wild estuary ecosystem aboard one of Shinta Mani Wild’s luxury expedition boats. Or, accompany rangers and researchers as they check camera traps and study the wild forests and their inhabitants.

Alternatively, you may want to use the time in the peaceful surroundings to relax and unwind. Enjoy the resorts amenities or visit the Khmer Tonics Spa on property for a rejuvenating range of treatments based on traditional Khmer herbs and healing rituals to reduce stress and reset inner balance.

For those looking to learn more about the Cardamom Mountains and what’s being done to protect this pristine jungle, consider joining an anti-poaching patrol. You’ll visit Shinta Mani Wild’s ranger station and watch them at work, removing snares and rescuing wildlife. You might also wish to accompany one of the naturalists in checking the camera traps and gibbon stations positioned around the property. This technology has served to identify numerous new species and to monitor local wildlife populations.

Today you say goodbye to Cambodia. You will be transferred to the Phnom Penh Airport for your onward flights home. 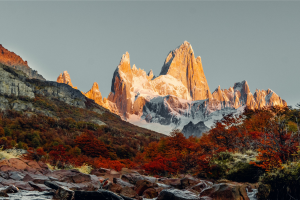 Uncover the Beauty of Patagonia 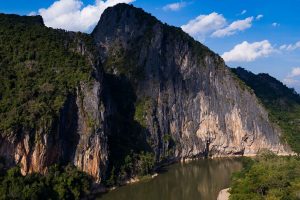 13 Days: A Deep Discovery of Laos