For as long as I can remember, I’ve never sat still very well. When my friends would dream of beach holidays, I’d fantasize about ascending big peaks, mountain biking away from civilization, or rock-climbing in the most remote corners of the world. So naturally, when the opportunity arose to return to Patagonia with Travel Beyond, I was thrilled to challenge myself physically while enjoying some of the biggest vistas in the world.

My trip broke down into three distinct segments: Torres del Paine in Chile and El Chalten and El Calafate in Argentina. And all three areas offered something unique for the active and adventurous at heart! 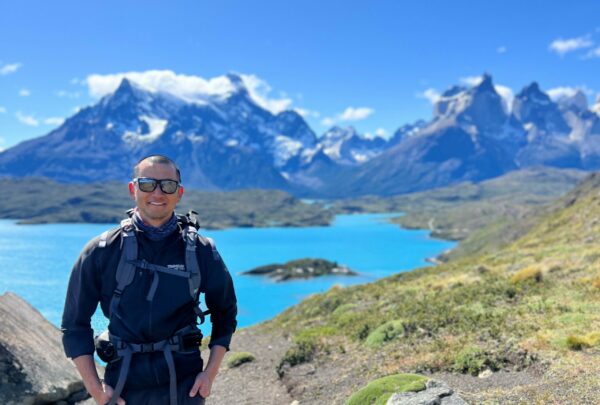 Torres del Paine National Park (TDP) is the epicenter of the Patagonian experience in Chile. I accessed TDP through Puerto Natales, considered the gateway to the park. As we approached TDP, we were rewarded with incredible views of the granite peaks, known as “horns,” which stand as a topographic anomaly in a region that is otherwise flat. I was salivating knowing that this would be my playground for the next three days.

While here, I stayed at Explora Lodge which is the only luxury property in the park. With over 40 excursions offered daily, there’s also no shortage of options. From easy hikes to the most challenging, overland trips to riding horses through the vastness of Patagonia, there’s something for everyone! But my mission was quite simple- to accomplish as much of the famed W Circuit as possible. 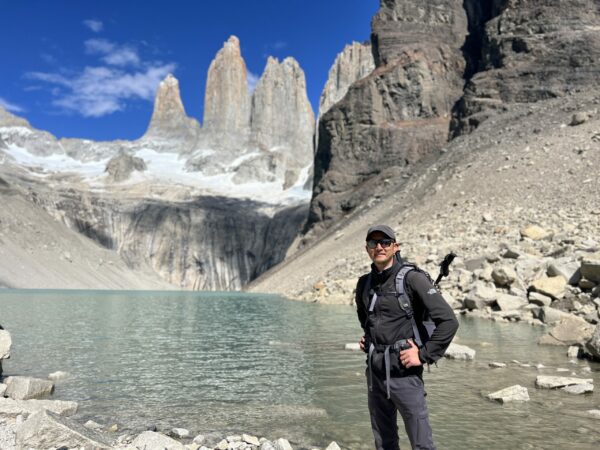 As many of you are aware, summer weather in Patagonia can be fickle and windy, but I was blessed with three days of forecasted good weather. Knowing this, I opted to tackle the Base of the Towers Hike on my first day. Just over 12 miles and approximately 3,800ft in elevation gain, this is perhaps the most iconic hike in TDP and makes up the eastern most sector of the W Circuit. The duration of the hike can vary depending upon the pace of the group, but you can expect to hike for approximately 8 hours. The trail takes you through various habitats including some stunning forested areas. The crux of the hike is the last segment with a steep ascent to the beautiful emerald lake overlooking The Base Towers. In true Explora fashion, our guide broke out his picnic kit which included hot soup, a charcuterie board, tea, coffee, and a flask of whiskey! We sat and enjoyed the stunning views while we ate our lunch and eventually descended back to the trailhead. As this route produces the most famous views within TPD, the trails were heavily traversed at some points, but it did make me realize that anyone with reasonable fitness and some mental grit can accomplish this hike. One for the books! 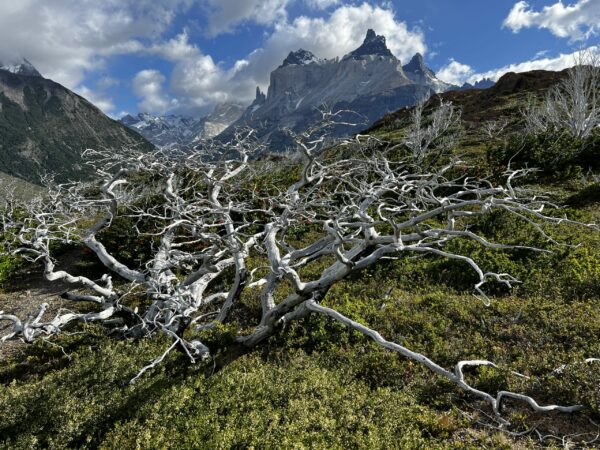 On day two, I tackled the middle section of the W Circuit, past the French Valley and up to British Camp. At just over 18 miles and approximately 2,900ft in elevation gain, this was, for me, the most challenging trek of the entire trip. Although the vertical gain was not great, the pace we had to keep in order to catch the catamaran back to camp meant we had to boogie. The famed French Valley produced stunning views of the glaciers above, but the real reward was miles ahead at the British Camp, an area at the foot of the TDP amphitheater. With 360-degree views of mountains and valleys, I found this location to be more impressive than the Base Towers. It’s far more remote and the vistas are much, much bigger. A super special reward for the grueling pace we had to endure!

For my final trek in the park, I did the Guardas hike which is the westernmost section of the W Circuit. Over the course of 10 miles and 2,800ft of elevation gain, this hike takes one past the Grey Glacier Refuge and to a second suspension bridge. As you get further into the hike, you gain a better perspective of the massive Grey Glacier below. This hike was the easiest of the three and boasted a unique reward at the end. Rather than hiking back to the trailhead, we hiked back to the Refuge to board a boat which took us up close to the glaciers themselves. Truly magical and a great way to cap off my time in TDP! 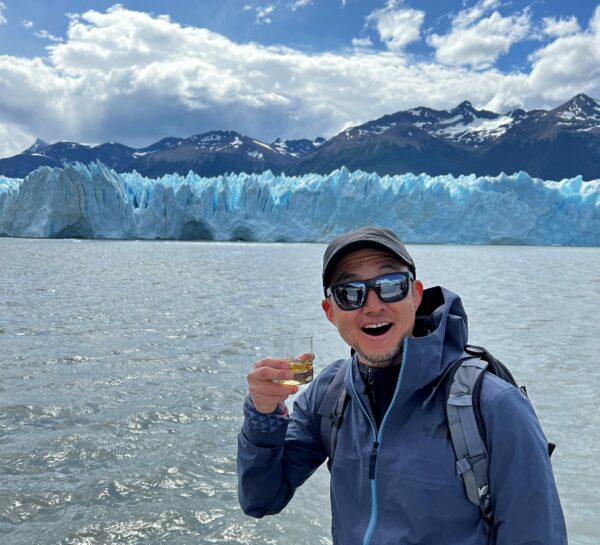 From TDP, I continued to Argentina’s El Chalten and stayed 3 nights at the new Explora Lodge (my personal favorite of the lodges I visited in Patagonia). I did two big excursions here, but I will write about the highlight, which was Cerro Madsen.

Cerro Madsen takes you up to the Laguna de los Tres which is the iconic hike leading to the Fitz Roy massif. From there, it’s a technical climb up Cerro Madsen which requires a harness, rope, and crampons. Although mountaineering experience would help, it’s not required. This hike is just over 20 miles and 4,900ft elevation gain. This excursion took roughly 13 hours but was by far and away my favorite of the entire trip. Because it’s a technical climb, and thus not an excursion everyone attempts, there was no other soul in sight and the panoramic views of the Fitz Roy massif and alpine lakes below were jaw-dropping. We were so blessed with great weather and the sense of accomplishment felt from doing this excursion was massive. Highly, highly recommended for those who don’t have a fear of steep terrain and exposure!

My last stop in Patagonia was in El Calafate, where I participated in the Big Ice excursion on the Perito Moreno Glacier. This activity takes you deep into the glacier fields where you are surrounded by otherworldly ice structures and hues of blue that are difficult to imagine. The approach to the glacier was quite arduous and the glacier hike itself was around 5 hours, so one must have relatively good fitness. As my photos will show, this landscape and color were out of this world! 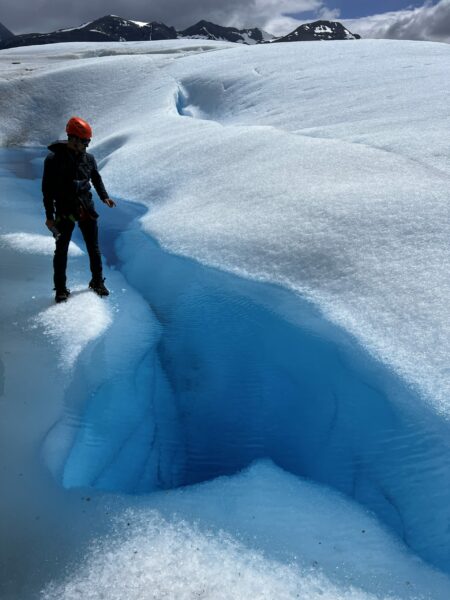 I’ve discovered in life that I am very much a goal orientated person. I love to set a challenge ahead of me and to feel that sense of accomplishment at the end. And for this reason, traveling to a place like Patagonia was truly epic. I won’t wait another 20 years to return.