In October I was lucky enough to travel to South Africa for the very first time on an educational trip with my colleague Jenny Falls. I knew we would have some amazing animal encounters, but I was not prepared for all of the experiences that were to come in the days ahead. Every single expectation was exceeded and by the trip’s end, we’d spent time with all of Africa’s most iconic animals: the elephant, lion, rhino, leopard and cape buffalo, a group also known as the Big Five.

The African elephant is not only the largest of the Big 5 but the world’s largest land mammal, reaching a height of anywhere between 8 to 13 feet and weighing up to 7 tons. With a matriarchal social structure, it is the women who run the show, taking care of the young and directing the herd.

I was most looking forward to seeing these massive animals and didn’t have to wait long. On our very first day we spotted a large bull ripping up the roots of a tree for an afternoon meal. As we sat and admired his sheer strength, our guide expertly analyzed the size of his tusks and the depth of the indents just above his eyes to determine his age. She also informed us that seeing a single bull was typical, as they lead solitary lives. 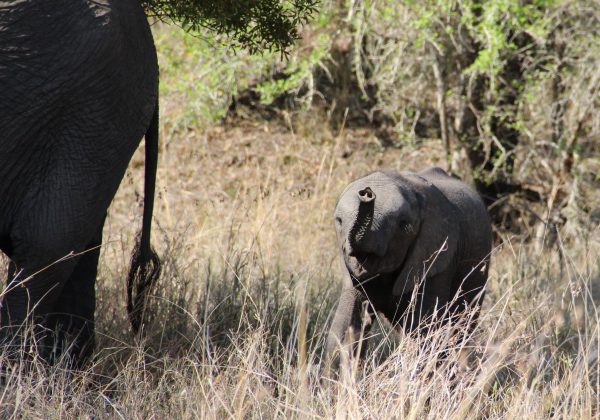 We then, later in the day, had the chance to step out of our vehicle and quietly observe some elephants moving across a small river. As we watched a large female directly across from us, we heard the bushes rustling a few meters away. Turning toward the sound, we saw a curious baby had made its way up the bank to investigate. As it raised its trunk to give us a sniff, our guide calmly, but with a sense of urgency, told us to walk single file back to the vehicle. Being that close to a baby elephant in the African bush was the most exhilarating experience of my life.

While in the bush you might hear a lion well before you see it, as their roar can be heard up to five miles away. This proves helpful for not only their prey, as a warning to steer clear, but also for the lions themselves. A social species, they often, particularly when looking for food need to communicate with each other across long distances. The lionesses lead the hunting party while the few resident males guard their territory, and the volume of their roar allows for the two groups to stay in contact. 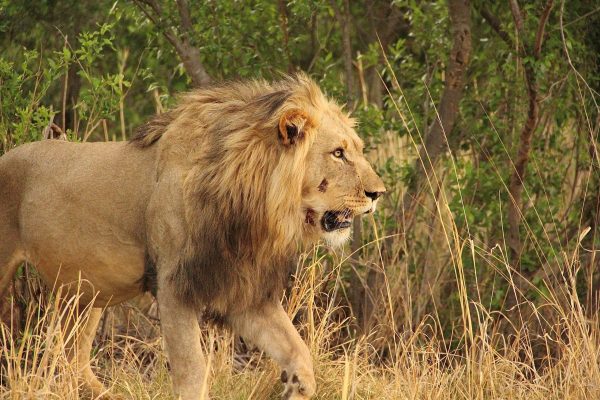 Being that lions are the apex predator of the bush I was shocked at how close the vehicles can get to these big cats. I held my breath as we got within feet of our first lion. But the most memorable experience was approaching a pride polishing off a buffalo kill. We arrived as the adults were napping and the cubs were crawling over the carcass searching for scraps. Just as the sun began to set, the dominant male returned to the buffalo and started ripping off the last of the meat, encouraging the rest of the pride to move in. At one point one of the females dared to sneak a piece. The male responded with not only a swat on the head but also a guttural roar. It is a sound I will not soon forget.

Cape buffalo can often be found in large herds of up to 2,000 members, within which smaller subgroups exist. However, some male buffalo will split from the herd all together, forming bachelor groups during the dry seasons. 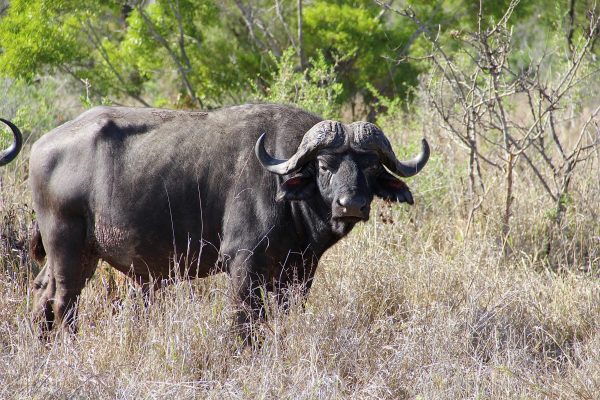 While on game drives, we saw many of these bachelor groups and quickly noticed that the cape buffalo had the most character of all the big five. Seeing the look on their faces, we couldn’t help but laugh and deem them the grumpy old men of the bush. It was a nickname that made perfect sense, as they are known to have a bad temper and are even classified as one of the most dangerous animals in Africa. I was surprised to learn this bit of information because as we watched them graze and swat away flies, they looked more bored with our presence than anything else.

Considered the most elusive and secretive of the big cats, leopards are known to cover a large territory on their own and fiercely defend it from any other members of their species. And while they all might look the same to the untrained eye, each individual is identifiable by the number of spots on their top line of whiskers and the notches in their ears. 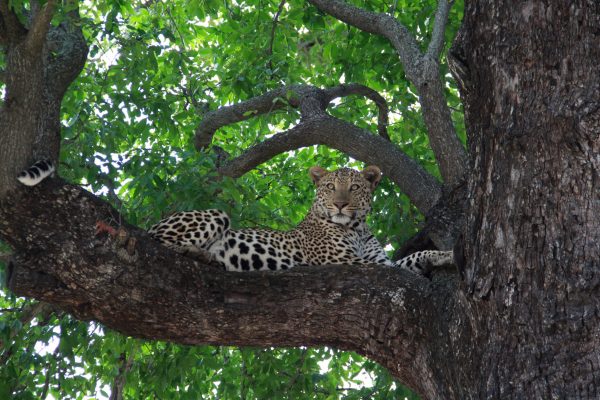 Jenny and I felt we had learned the most about the leopard and were pleasantly surprised by the number of sightings we had. While on safari we saw many beautiful males, but my favorite encounter was with a mother and her cub. We watched as they shared a meal, groomed each other, and walked off towards the river. The two bumped heads as they made their way, which felt to us like a sign of affection. We even saw the cub run ahead, hide behind a bush, and playfully jump out at her mom as she passed by.

It is no secret that the rhino is famous for its large horns, which are primarily made up of keratin, just like our fingernails and hair. Both males and females can grow their horns up to five feet and use them to protect their young or territory. They are also what make rhino a prime target for poachers.

I thought coming across a rhino would be like seeing any other animal in Africa; but when we spotted our first and saw the reaction of our guide, who is out in the bush every day, I realized just how special these encounters are. Jenny and I were also lucky enough to get insider information on the conservation efforts in place to help save the population of these beautiful animals. It was difficult not to get emotional as we spent some time up close with these gentle giants. 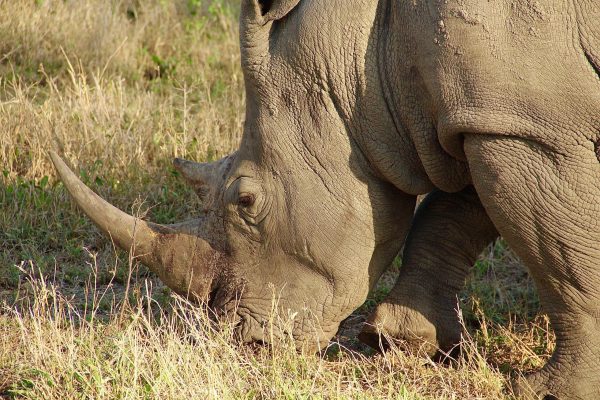 It was a dream come true to hop in a safari vehicle and spend almost two weeks not only in the bush itself but alongside some of the most magnificent animals on earth. If asked which was my favorite, I don’t think I would have an answer because every encounter was so special and unique. After my first trip to Africa, I feel incredibly lucky to have experienced a few moments with each member of the big five.