Coming in second doesn’t always have to be a disappointment; as is the case with Los Glaciares National Park in Argentina. The second largest ice field in the world behind Antarctica, it stands in a class of its own. There are over 200 glaciers in the park, including some of the more notable ones like Spegazzini, Upsala and Perito Moreno. These glaciers feed into Lake Argentino, which just so happened to be the starting point for my journey aboard the Santa Cruz, a 40 passenger, 130-foot long yacht.

After spending three nights in Buenos Aires, it was time to escape the hustle and bustle of the city and explore the great outdoors that is Patagonia! A 3-hour flight transported me to El Calafate, a gateway to spectacular mountains, glaciers, waterfalls, lakes, and everything else awaiting in the southern region of the continent. From there, it was a 45-minute drive to the port, where I embarked on what would be my home for the next two nights. 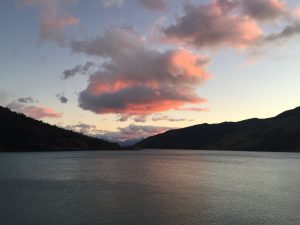 Most of the day had been quite pleasant with passing clouds and a moderate temperature in the 60s. But once aboard the Santa Cruz, a rainstorm moved in complete with pounding rain and howling wind. Because of this, when the boat hit the open water, it was choppy, and I worried that I would become motion sick, as I’ve been prone to it in the past. Luckily, it was short-lived, and by the time we reached our protected bay for the evening, I could barely feel that I was even on a boat.

The next morning, the skies cleared, and we ventured out to a trail leading up to the Spegazzini Glacier viewpoint. Due to the heavy rain the day before, the trails were muddy; but if you have a moderate level of fitness, it shouldn’t be a problem. A few guests that stayed aboard while we hiked due to lack of mobility, but there was still plenty of gorgeous scenery to be had from every vantage point – whether it be the lush green trees, the snow-capped mountains or fluffy white clouds, all of your senses were tickled. Despite the blue skies and sun, we were, thankfully, advised to dress in layers. One moment, I’d work up a sweat and the next, I’d round a protected hill coming face-to-face with such strong wind gusts that I needed a parka. 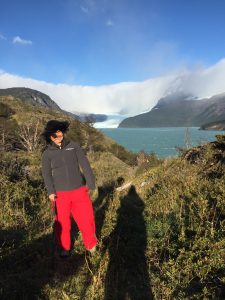 Once everyone was back on-board, the boat made its way toward Spegazzini, bringing us up close and personal with the magnificent glacier. There were wisps of water clouds that would dance above the lake, signifying, according to the guide, that wind gusts were over 60 miles per hour. I could have sworn there were times when the boat didn’t make any progress forward, but alas, we made it!

After lunch, the boat navigated to Upsala Glacier, the largest in the park. Several icebergs floated nearby and while they paled in comparison to the size of the glaciers, they carried their own story and beauty. 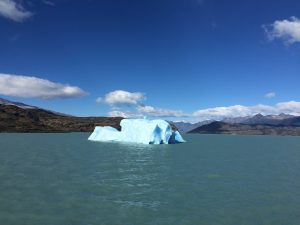 Later in the evening, we set off once again, this time for a short hike at Bahia Toro. The trail afforded us stunning views of a waterfall and the lakeshore. It was late in the salmon season, but nonetheless we were able to spot two in the stream. Some of the crew and fellow passengers even caught one with their bare hands! Whether it was luck, true skill, tired salmon, or maybe even all of the above, it was quite the sight to witness. 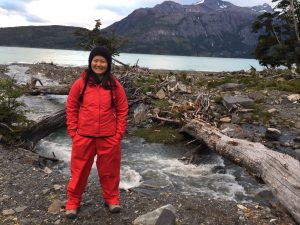 And just when I thought the views couldn’t be more amazing, they were. On day two, we hiked to a lookout spot in front of Mayo Glacier. Here the terrain was completely different than the day before. Envision hopscotch on rocks; so it’s important that you be nimble and to grab a pair of hiking sticks to help with stability. 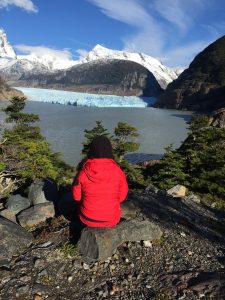 Finally, it was on to the main event: the park’s most famous glacier, Perito Moreno. First, we approached the glacier from the boat. This allowed us to view it from ground level and put in perspective just how vast the glacier truly is. Then, we disembarked on the shoreline across from Perito Moreno and walked along a grated metal path with the guide.

We spent about an hour and a half viewing the glacier from as many vantage points as possible, and we could have easily stayed even longer, soaking up the tranquil yet mighty force that is Perito Moreno. 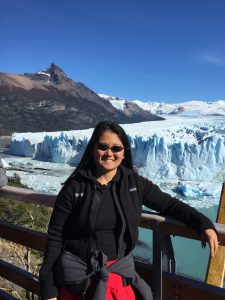 From here, we boarded the Santa Cruz a final time before it was time to say goodbye. I  continued on to the Chilean side of Patagonia, where I stayed at a lodge to hike and ride horses. The pairing of the Santa Cruz and lodge experience complimented each other perfectly—I had the chance to be out on the water, see glaciers that can only be viewed from the lake, as well as trek through prairies, forests, single-person bridges and rugged untouched terrain.